Every App Extension requires an app, and Network Extensions are no exception. Before we jump into the nitty-gritty details of the packet tunnel itself, let me walk you through the app.

The app is not just a container for an extension. It is also going to serve as a way to install and manage the VPN configuration. Let’s call our service BestVPN.

There are going to be two primary screens: 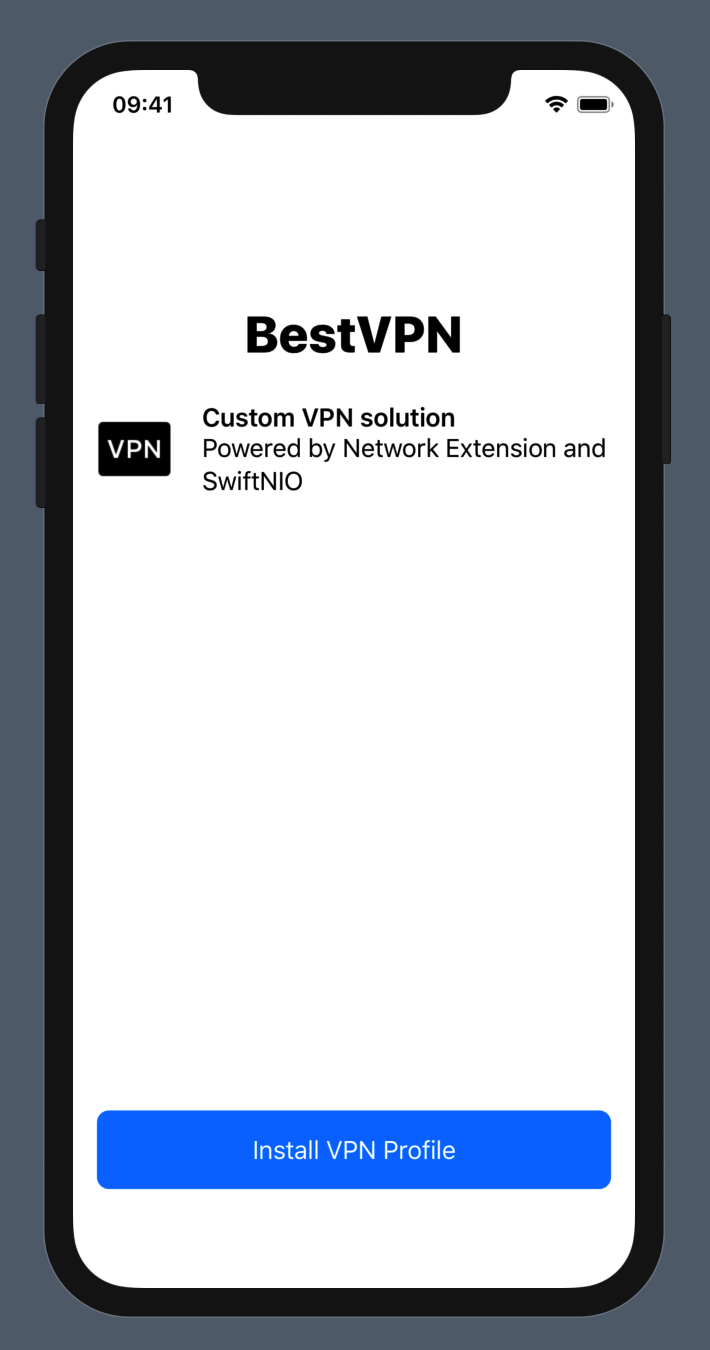 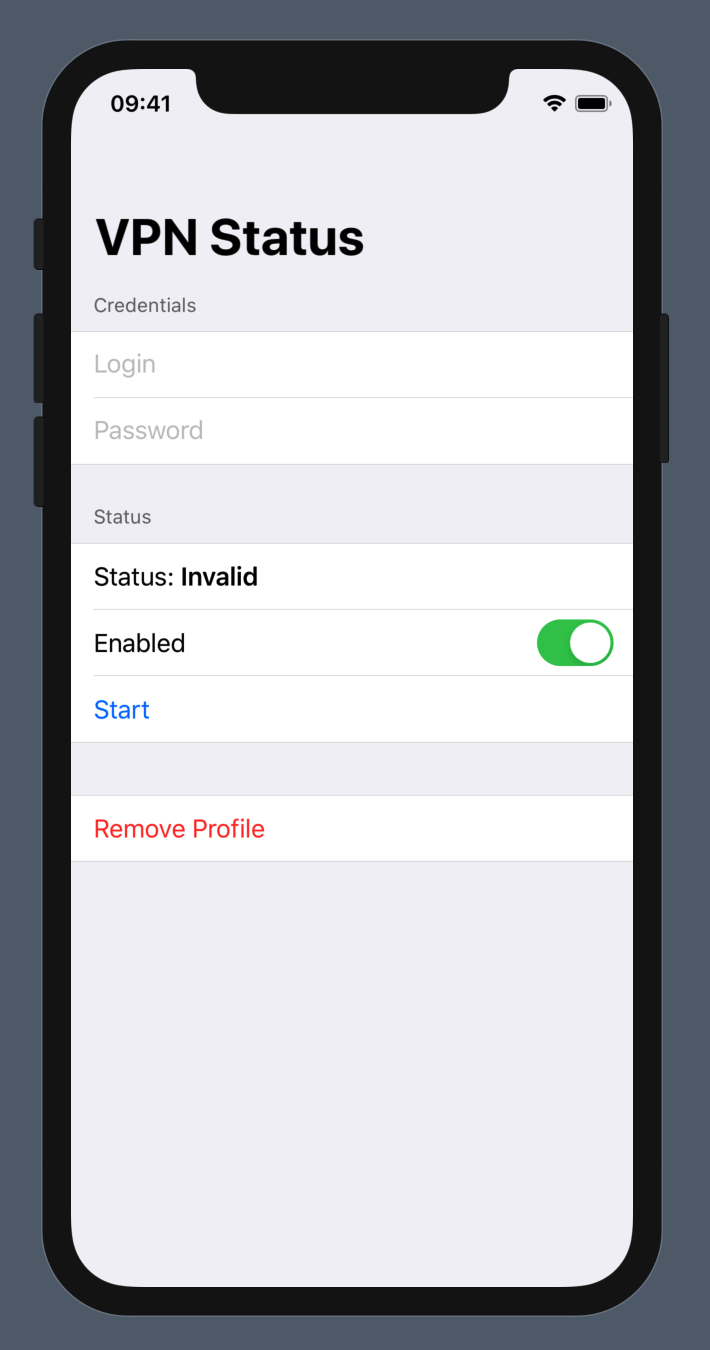 I’m going to build the app using SwiftUI and share some of the details regarding Network Extensions.

The entire app source code is available at kean/VPN.

First, we are going to need an entitlement for our app:

The easiest way to add entitlements is via Signing & Capabilities in Xcode. 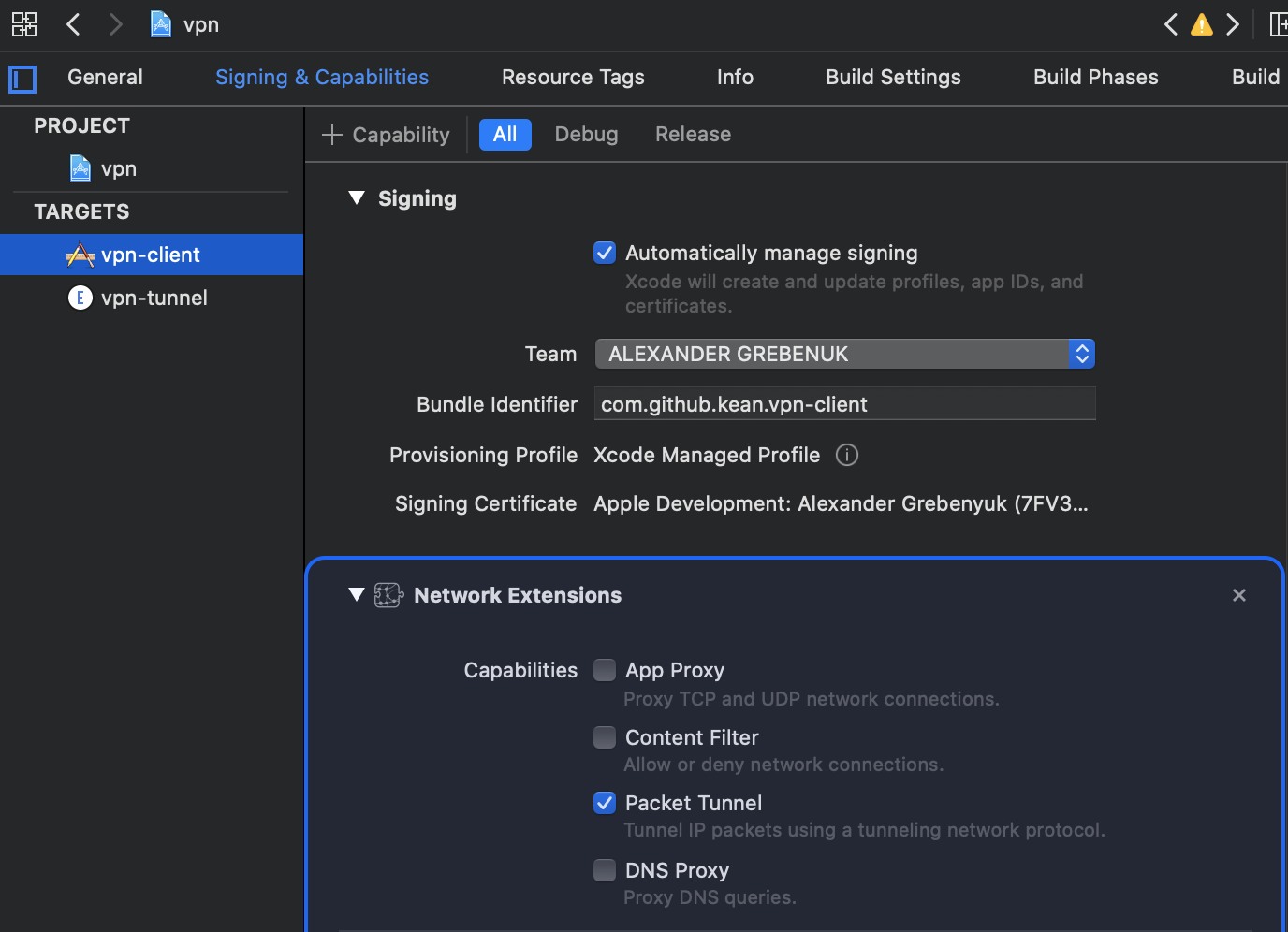 One you go through the steps, you are going to see the following two entitlements appear in your apps’ entitlements list:

If start interacting with Network Extension APIs and see the following error, most likely means that the entitlements are misconfigured:

You must run the app on the physical device, Network Extensions are not supported in the iOS Simulator.

The primary interface for managing VPN configurations that use a custom VPN protocols is NETunnelProviderManager, which is a sublcass of NEVPNManager.

You can use NEVPNManager without the tunnel provider to create and manage personal VPN configurations that use one of the built-in VPN protocols (IPsec or IKEv2).

The first thing that you want to do when your app starts is read the exiting configuration.

This method reads all of the VPN configurations created by the calling app that have previously been saved to the Network Extension preferences. The completion closure gives you the list of “managers”, each represents a single saved VPN configuration.

Creating and saving a VPN configuration is relatively easy. All you need to do is create and configure NETunnelProviderManager instance and then save it.

In this sample we created a manager and configured its VPN protocol. Once you created an instance of NETunnelProviderManager, you can save it:

Apple Developer Forums are one of the best and only sources of information when debugging Network Extensions issues.

When the user taps "Install VPN Profile" button, a system alert is going appear and is going to guide the user through the process of installing the VPN profile. Once it's done, the system returns the user back to the app where RouterView presents a "Tunnel Details" screen from earlier.

RouterView is a component responsibly for top-level navigation in the BestVPN app.

In the next section, I'm going to cover the "Tunnel Details" screen and how it interact with the system settings in details.

Now that the profile is installed, the same NETunnelProviderManager instance can be used to update it and to manage the connection status.

Each VPN configuration is associated with the app that created it. The app’s view of the Network Extension preferences is limited to include only the configurations that were created by the app.

If you go to Settings / General / VPN, you are going to see your VPN configuration registered there.

The settings screen allow user to switch between configurations (isEnabled), start/stop VPN, and even remove the configuration. This is why it is important to use .NEVPNConfigurationChange and .NEVPNStatusDidChange notification to update your app UI accordingly. 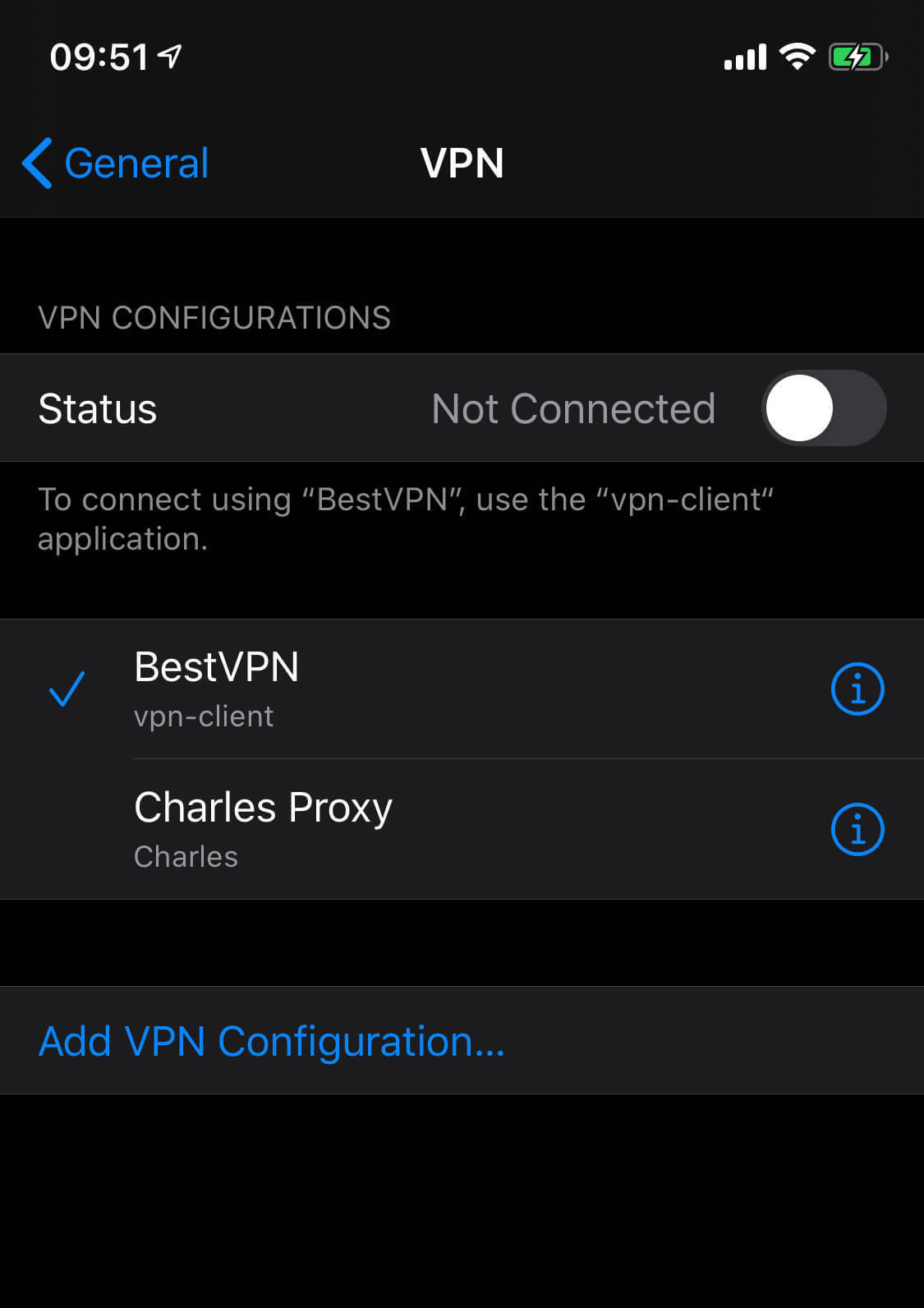 A manager has an associated NEVPNConnection object that is used to control the VPN tunnel specified by the VPN configuration.

The tunnel can be started/stopped programmatically.

Here is an example how to configure a manager to always start a tunnel whenever it is needed:

Now let’s quickly create a Packet Tunnel Provider extension itself to see if it actually works. 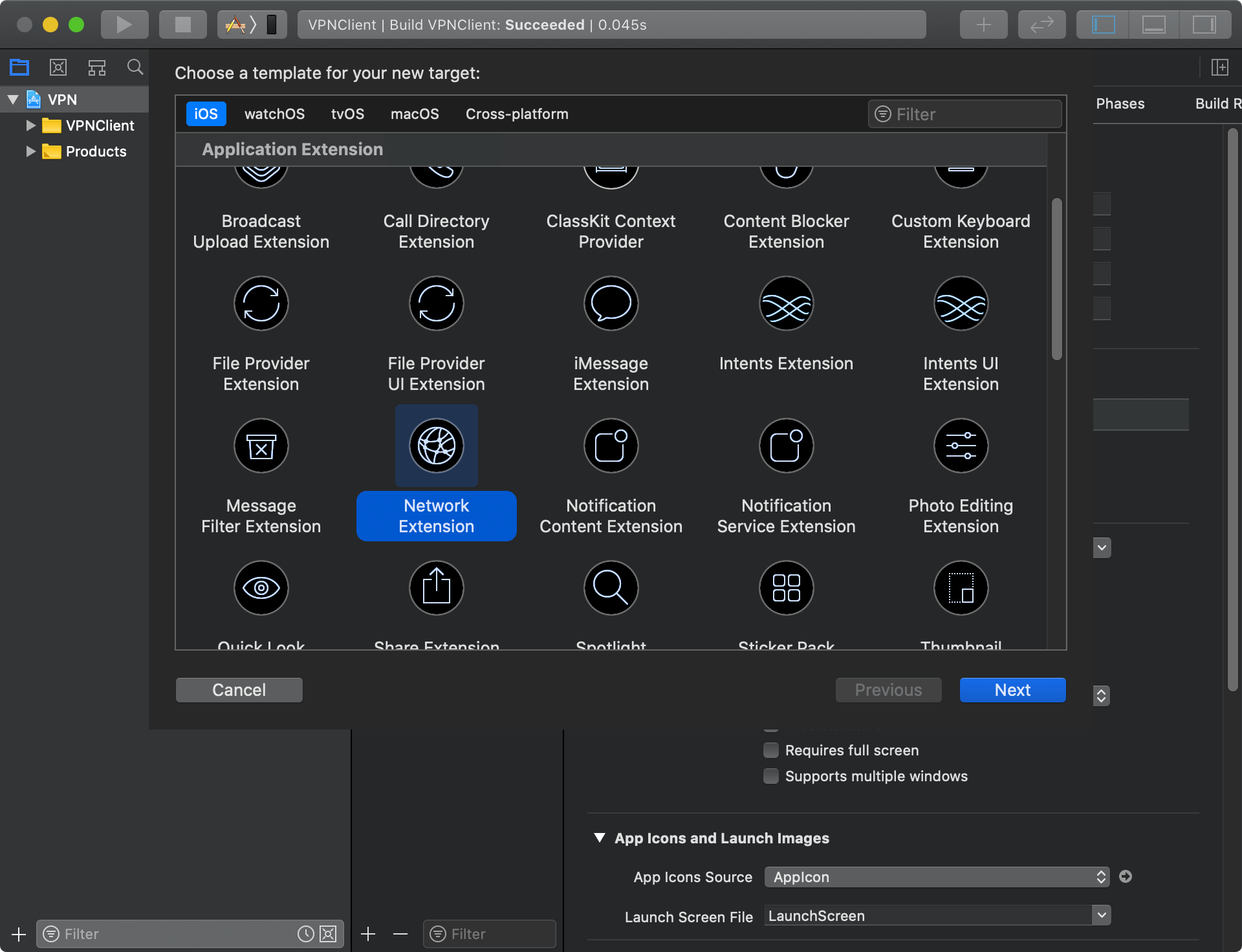 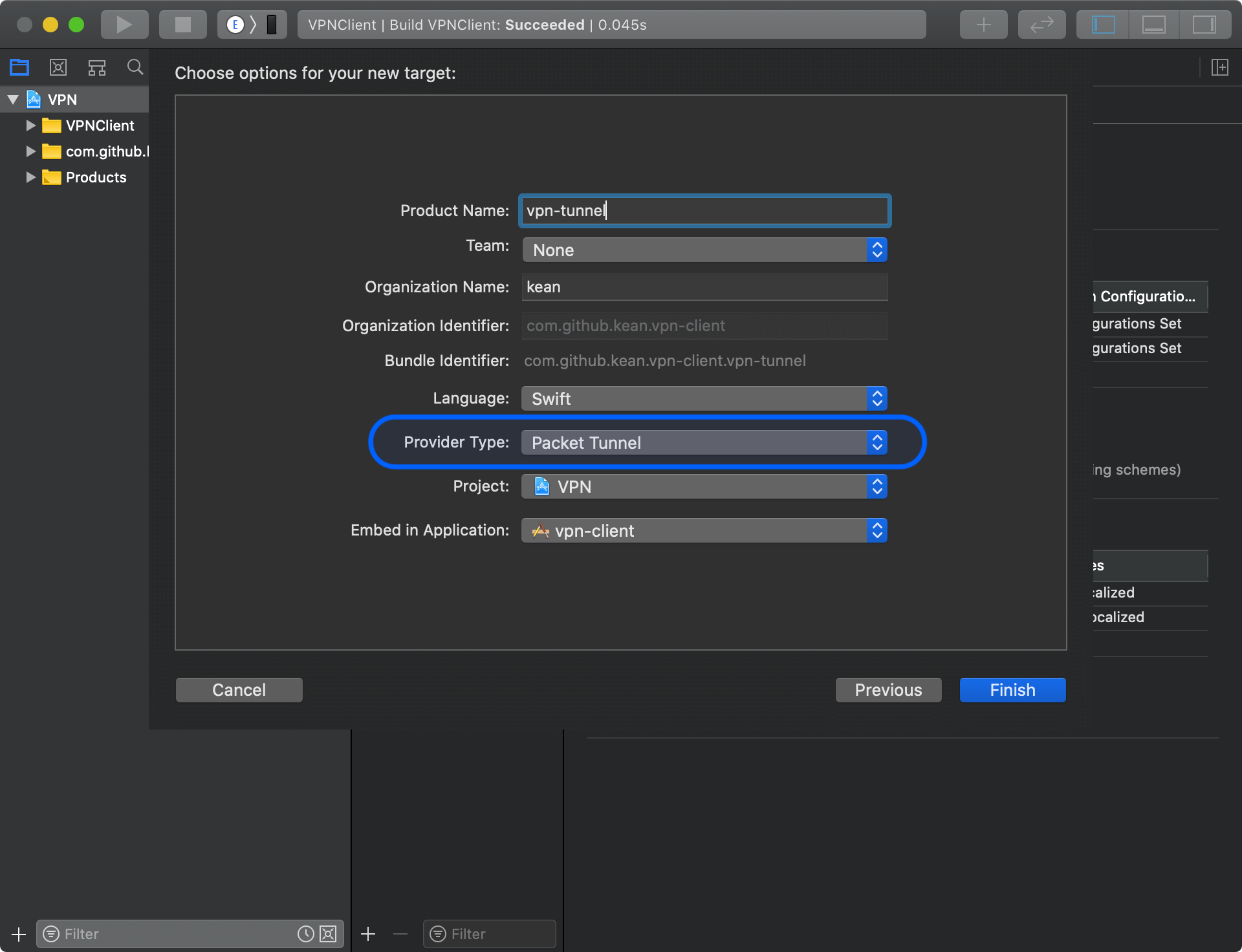 When the extension is created, you must always set up entitlement to match the app. 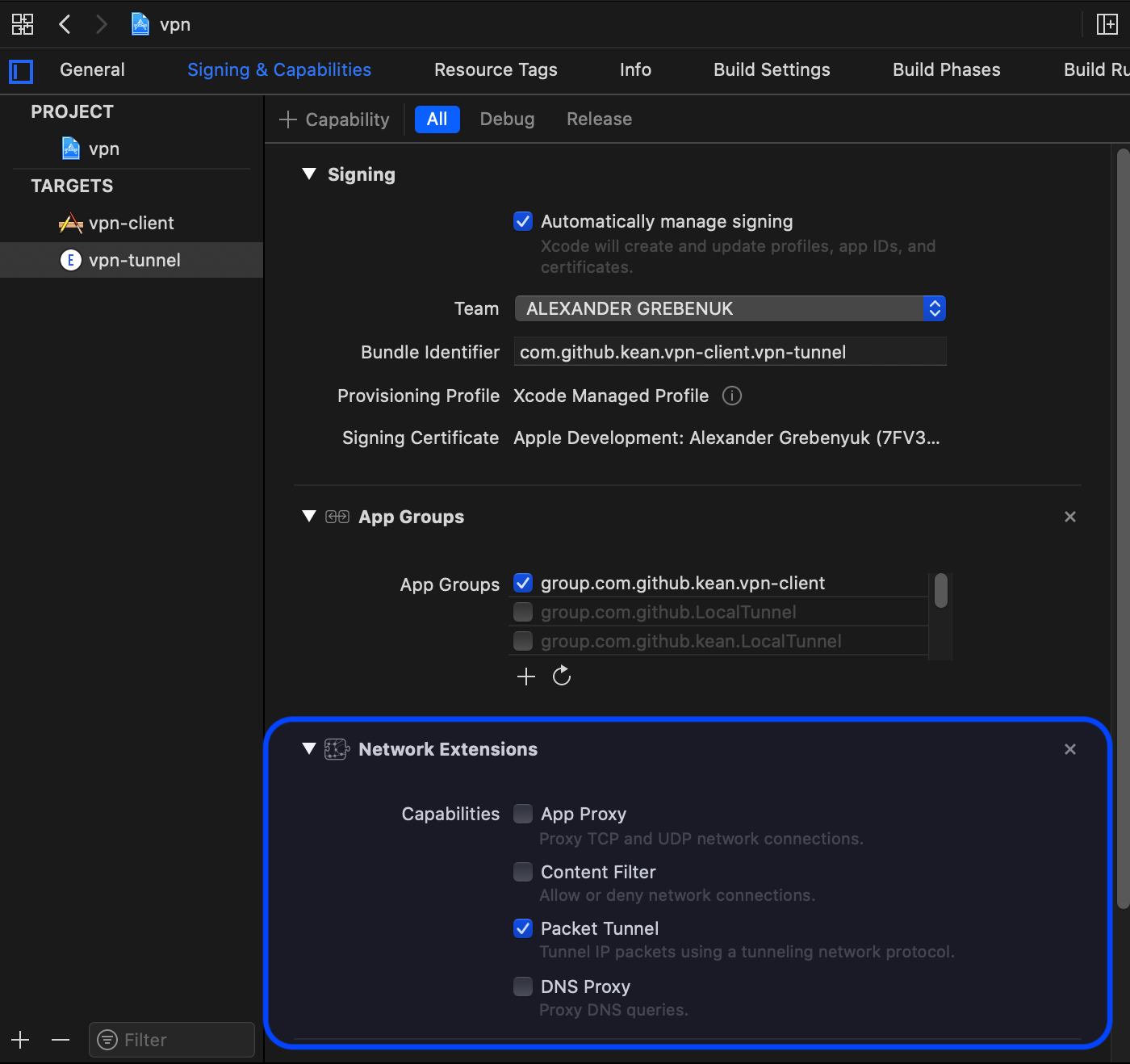 By default, Xcode creates an NEPacketTunnelProvider subclass automatically for you.

Don’t rename the NEPacketTunnelProvider class. If you do, make sure to update Info.plist file with a new class name, otherwise the extension is going to start crashing on launch.

Now when you run the app on the device, and install the profile, it should automatically start the extension.

Debugging an extension is a bit tricky. When you start the app, Xcode automatically attaches the debugger to it. It is not going to happen with the extension. To attach a debugger to an extension, go to Debug / Attach to Process by PID or Name… and add the name of your extension.

If the extension is already running, Xcode will attach the debugger to it. If it isn’t running, Xcode is going to wait until it starts running. Now when you open a Debug Navigator, you are going to see two processed instead of one (typical to iOS app development). 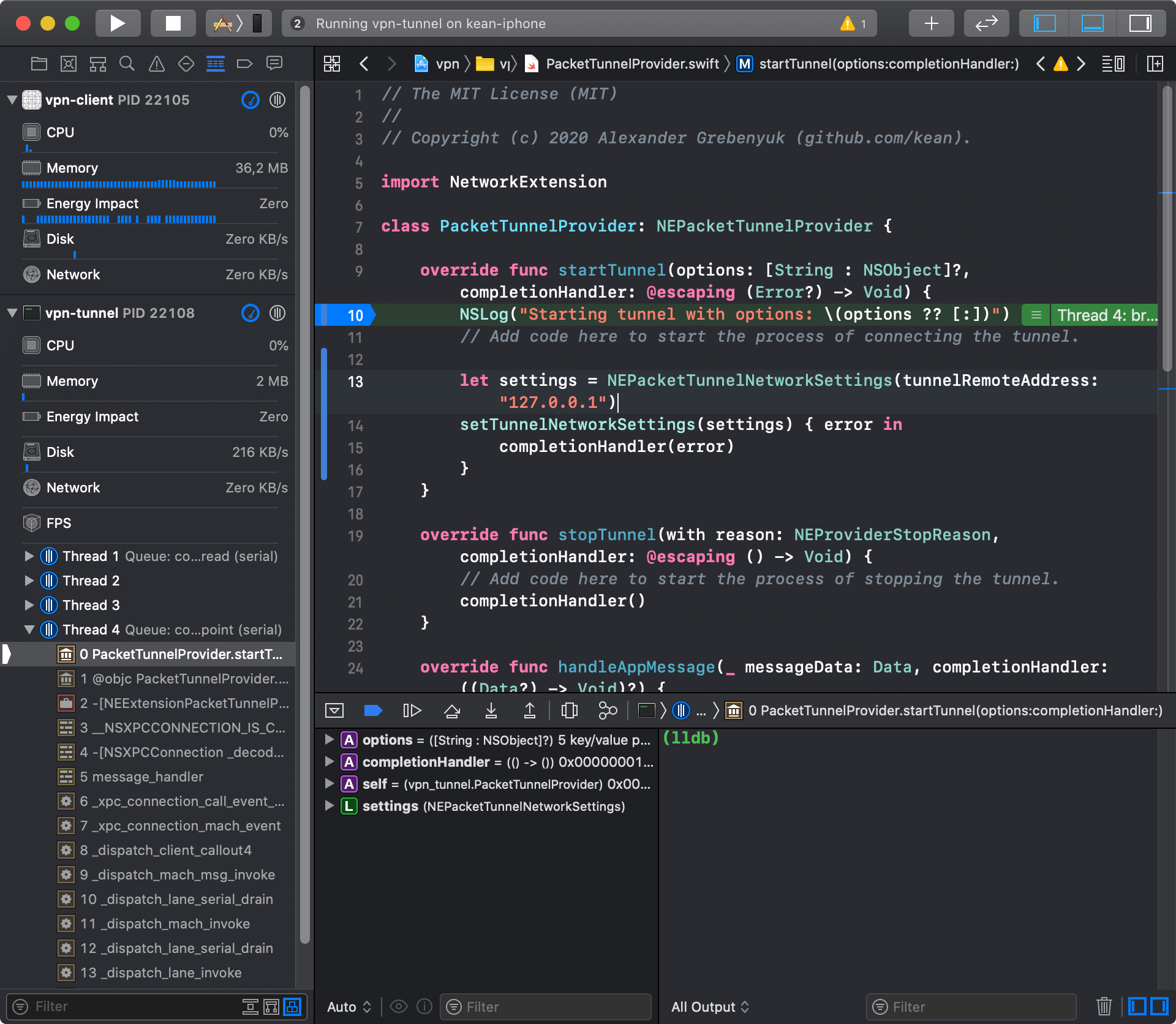 I encourage you to test whether you are able to attach the debug to the extension.

App extensions are quite unforgiving and debugging them can become a nightmare. If you are not able to attach the debugger or the extension process crashes without reaching PacketTunnelProvider go through the following troubleshooting guide.

Congratulations, if you reached this point, you know how to install a VPN configuration, enable it, start a VPN tunnel, and attach a debugger to it. This a great progress! In the next part, I’m going to cover the Packet Tunnel itself.

MVC – The Past. MVVM with RxSwift or ReactiveCocoa, MVP – The Present. Functional Architectures – The Future.