This post is about how one bad assumption about XCFrameworks turned into multiple hours of needless effort. I wanted to quickly share my experience so others could avoid falling into the same pitfall. In retrospect, the problem seems obvious, but it wasn’t when I just encountered it.

Last week I started working on a binary distribution for Pulse. My initial dependency graph, before knowing anything about XCFrameworks, was this: 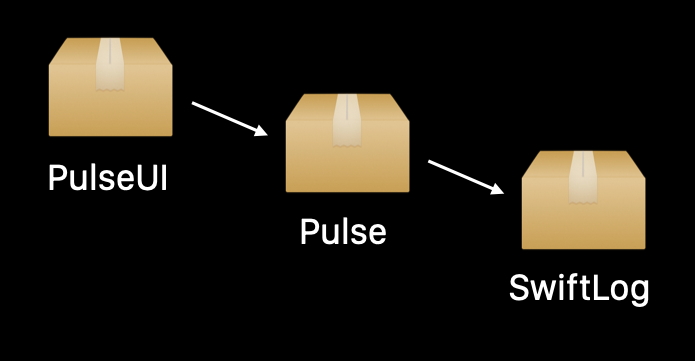 PulseUI and Pulse were Swift packages, each in its own repo. My initial goal was to distribute only PulseUI as a binary package.

My initial naive approach was to simply build PulseUI as an XCFramework.

This was based on an assumption that XCFrameworks can have dependencies on Swift Packages.

To build an XCFramework you use xcodebuild. It’s a multistep process that requires you to have an Xcode project which I didn’t have. Fortunately, swift-create-xcframework came to rescue. It’s a fantastic script and I can’t recommend it enough.

There are currently two great ways to build XCFrameworks:

Swift Package Manager supports XCFrameworks, so I went ahead and updated PulseUI.package:

This is where I encountered the first red flag: there was no way to specify a dependency for a .binaryTarget. I went to Google and what I wished I found was this: 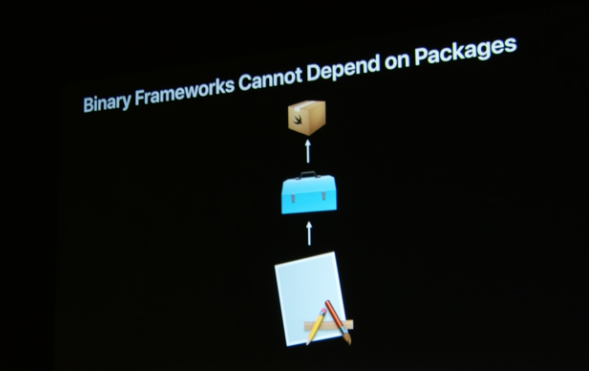 But unfortunately, this picture is from the very end (38:16) of the WWDC video from 2019 which reduced its chances of me finding it on Google quite dramatically. What I found instead was this thread on Swift Forums which explains a workaround on how to add sub-dependencies for binary targets using fake targets which put me on a sidetrack1. I thought OK, so you are saying there is a chance.

I reworked the package manifest, now was the time to try and integrate it into the app. Xcode installed the package without any complaints and I was able to run the app. The run failed.

This is fine. XCFramework links to its dependencies dynamically and Xcode defaults to static linkage for Swift packages. As a package user, you can’t change whether to use static or dynamic linkage, but you can do that as a package author. Knowing that I can’t change apple/swift-log manifest, I still went ahead and changed Pulse library type to .dynamic. This also failed but with a different error this time:

My understanding, and I might be wrong here, is that the problem has to do with Library Evolution (or the lack thereof it). The way library evolution work is by generating a .swiftmodule folder for your framework.

One of the key parts of .swiftmodule is a textual .swiftinterface file which is a representation of the public interfaces of your framework.

These are a lot of intricacies when it comes to .swiftinterface but the main takeaways are:

But it looks like we are almost there with the tooling. For the sake of the experiment, I even tried combining different source-compatible versions of Pulse.xcframework and PulseUI.xcframework built at different times in the test app and it worked perfectly. I’m not entirely sure what’s stopping Xcode from realizing that a binary dependency has a source dependency and compiling the source dependency with library evolution support enabled.

What I ended up doing eventually is rewriting the framework so that there are no dependencies from binary frameworks to Swift packages.

With this approach, I was finally able to ship my frameworks2. As a final test, I uploaded the app with the frameworks to TestFlight.

If I were more diligent, I would’ve learned about the limitations before starting my work. I watched the WWDC video that I referenced earlier. I don’t know how the crutial information about package dependencies exited my mind. Maybe I just haven’t watched until the very end. At least it was before credits. Anyway, I didn’t feel the need to rewatch it, because 90% of the video was trivial.

I’m now thinking, could Xcode do something to at least communicate the problem early? It couldn’t when I was writing a manifest, initially the package dependency was in a different repo. But it could probably throw a more user-friendly error during dependency resolution saying that the configuration isn’t supported.

The main thing is that with a few hiccups but I was able to achieve what I needed and Pulse could now be distributed.