More like Core Foundation. It’s still there behind the scenes, but programmers use high-level Objective-C and Swift wrappers from Foundation. If something is missing, you can call an underlying C API. The relation between SwiftUI and AppKit is similar, for now1. 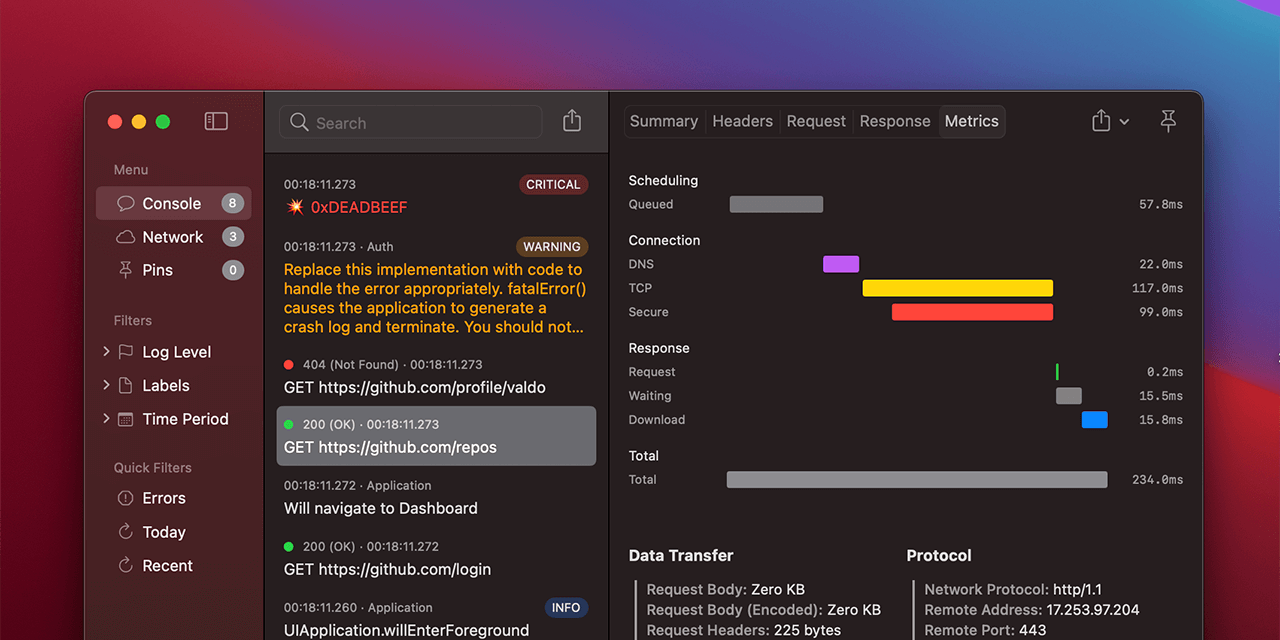 This is a native macOS app written entirely in SwiftUI, from @main to bottom. Not a prototype, not a toy. A full-featured app. The intention is to deliver the best macOS experience possible.

The two main reasons this app is possible are SwiftUI and Big Sur. I have extensive experience with iOS, so I started with it. When the time came to adopt it for macOS, I was anxious. I had no idea what to expect from SwiftUI on a Mac. But thanks to the new SwiftUI APIs and the Big Sur design changes, everything just made sense!

Want to learn how to build macOS apps or see some videos with rad UI interactions?
This post is for you.

The first step was to get the navigation right. I knew I wanted to use triple-column navigation3. SwiftUI makes this setup ease.

The key is the type system. What you used to configure in code, e.g. by passing a number of columns to UISplitViewController, you now configure using generic parameters. In my case, the type of the view is NavigationView<TupleView<(Sidebar, Text, Text)>>.

Use navigation links as usual. To make the first tab active by default, pass isActive in the NavigationLink initializer with a value of true.

By default, the toolbar displays a title in the main panel. To disable it, I used UnifiedWindowToolbarStyle(showsTitle: false).

Don’t use the List selection API for navigation. It only exists to support single or multiple item selection of items in edit mode.

The “Toggle Sidebar” button does not appear by default. To add it, use .toolbar modifier.

Unfortunately, there doesn’t seem to be a way to hide the sidebar programmatically using NavigationView. I had to use NSApp APIs. One of the few AppKit usages in the app.

The relationship between SwiftUI and AppKit are not documented and not guaranteed to be supported. This workaround is useful for now, but might stop working in the future.

To add a “Toggle Sidebar” shortcut, use SidebarCommands.

If you have a group of items, put them in ToolbarItemGroup. This will ensure proper positioning and spacing.

Customize the positioning on buttons with ToolbarItemPlacement. The positioning that you can see on the video is the default option, no customization is needed.

To create a collapsing section, use DisclosureGroup. You can even nest sections. To open a section programmatically, use isExpanded binding.

To learn more about outlines, see WWDC 2020: Stacks, Grids, and Outlines in SwiftUI

With the new WindowGroup API introduces in Big Sur, SwiftUI takes care of certain platform behaviors. For example, users can open more than one window from the group simultaneously. When the user double-clicks on a list item in the main panel, it opens the details in a separate window. This happens automatically.

It also comes with a standard set of shortcuts: Command-Tilde to switch between open windows, Command+W to close, Command+M to minimize, etc.

You can also open a new window group using Command+N. In my case, the app remembers the database you selected. This way you can have multiple views on the same set of logs with different filters. Very useful when investigating complex issues!

Search is probably the most complex UI feature I built. It felt like I was pushing it.

The search field, the search toolbar, and how the searches are performed is not particularly interesting – same as in AppKit. What is, is how do you scroll to the next item and activate the navigation link each time the user hits the Return (↩) key?

For programmatic scrolling, I used ScrollViewReader.

When the user hits Return (↩), ConsoleViewModel updates the published selectedObjectId property value observed by the view.

Every declarative framework is imperative if you try hard enough.

Now, what about activating the navigation links? We already know how to do that using isActive. But what do you do in a dynamic list? The solution I came up with is to create an array of bindings and grow it every time the number of items increases.

By the way, this is not the only way to navigate a list with a keyboard. By default, on macOS, List can also be navigated with “Up” and “Down” arrows!

A similar search is also available on a details screen. This is the only place (except for NSSearchField) where I had to use AppKit components directly. SwiftUI doesn’t yet have a wrapper for NSTextView (except for TextEditor, but it doesn’t support attributed strings that I needed for syntax highlighting). So I had to create one.

Now here is the question. Does it mean that SwiftUI is somewhat incomplete? Maybe. After all, text view is a common component. But SwiftUI is built on top of AppKit, it is not going anywhere. Just because I had to wrap two components doesn’t mean that SwiftUI was in the way. Quite the opposite! The AppKit integration works great.

Despite the rumors of SwiftUI’s lack of programmatic navigation, it exists.

One of the cool Pulse features is the ability to pin important messages. Imagine you are investigating a bug report, you found some related messages, but you are not sure. You can pin them and get back to them later in the “Pins” tab.

You can also pin a selected item using Command+P shortcut.

But this isn’t enough, is it? What you want to do is the ability to open pinned messages in the list. Pulse allows you to just that.

To implement it, PinsViewModel sends a message to MainViewModel: “hey, open a message with this ID”. MainViewModel activates the console navigation link and asks ConsoleViewModel to scroll to the given link. The console uses the same implementation from search. Simple.

To add a context menu to the view, use .contextMenu modifier. It’s relatively easy to use and there are plenty of code samples online, including the official documentation.

The context menus look different on different platforms. On iOS, you invoke a context menu using a long-press. On macOS, it’s a right-click. You can add context menu to pretty much any views.

Menu is a related component. Unlike .contextMenu, a menu has a label (can be a button) to be displayed on the screen. To invoke a menu, you press the button. On macOS the menu also automatically adds an arrow to the control.

Menus can have pickers, this is how you create hierarchy.

The menu from the video can be improved even further. When there are only a couple of items, there is no need for a hierarchal menu. To flatten the hierarchy, use InlinePickerStyle.

Unlike iOS, there are multiple ways to implement sharing on macOS. A common approach is to fetch the list of sharing services available for the current item and put them in a context menu. My initial implementation looked like this:

Now, here is a problem, the first time you call NSSharingService.sharingServices it is slow. And when you create a menu, its content is evaluated eagerly. When I added the menu to the details screen, the first time I open it, it would be unacceptably slow.

My first attempt to fix it was to load services asynchronously when the menu appears while showing a placeholder “Loading…” button. This didn’t work. The menu just wouldn’t reload when the request is done.

What I ended up doing – and I’m not sure I’m happy about – is pre-fetching the list of services when the app starts and just hoping that the user doesn’t open the share menu before that.

If that wasn’t enough, here is a dozen more tips.

SwiftUI isn’t perfect. I had to compromise in a few places. But I don’t have a lot of bugs to report4. Maybe I’m just getting better at avoiding things that don’t quite work as expected. There are some limitations. But the AppKit integration is always there for me.

One of the criticisms I hear a lot is: “I started using SwiftUI and it took me T amount of time to build X, it would’ve taken me a fraction of time to do that in AppKit”. I voiced this criticism. SwiftUI is complex and is not magic. It is almost nothing like AppKit which I think is a good thing. But it means that you need to learn a lot before you can use it efficiently, even if you are already familiar with the core principles behind it.

There are still a lot of things that can’t be done using only SwiftUI. I can sacrifice certain features for my app, but I can’t sacrifice performance. So far, List was the main impediment (as long as you have a decent number of items to display). If you want to learn more about List limitations, see the next post.

Is SwiftUI a game-changer for macOS? It’s economics. It might seem like web technologies are dominating the desktop. On the one hand, there is M1 which is finally powerful and energy-efficient enough to run Slack, rejoice! On the other hand, the calculation is changing thanks to SwiftUI. AppKit is arguably one of the main impediments for developing apps for a Mac. But SwiftUI opens this market for millions of iOS engineers. The path to delivering great native experience on Apple platforms is becoming clearer than ever5. I heard you can even put Swift on a server, but was not able to reach Tim Cook for comment6.