As engineers, we are always looking for ways to reduce costs and still satisfy all of the project requirements. We have to be very careful to only invest the engineering time into things that truly matter. This is just basic economics. And that’s where the debate about unit testing comes in. Is it worth it?

Proponents of unit testing claim that tests help you understand the requirements, give you confidence during refactoring, serve as executable documentation, reduce defects, facilitate good design, and reduce global warming. So what’s there not to love?

Unfortunately, it’s incredibly easy to write poorly designed tests that don’t test anything important, which are slow to run, which are hard to maintain, and which make refactoring harder, not easier. It is possible to have negative value tests. Writing tests is easy. How to write good ones?

First, we need to set the right goals. For example, achieving 100% code coverage. An optimistic goal. Easily measurable. That’s what we are going to optimize for, right? No.

I do have high test coverage in my frameworks, like Nuke. But frameworks are a different animal: a lot of consumers, APIs don't change as often, no dedicated QA team, and no time pressure. I talk more about unit tests and frameworks in CI for Swift Frameworks. 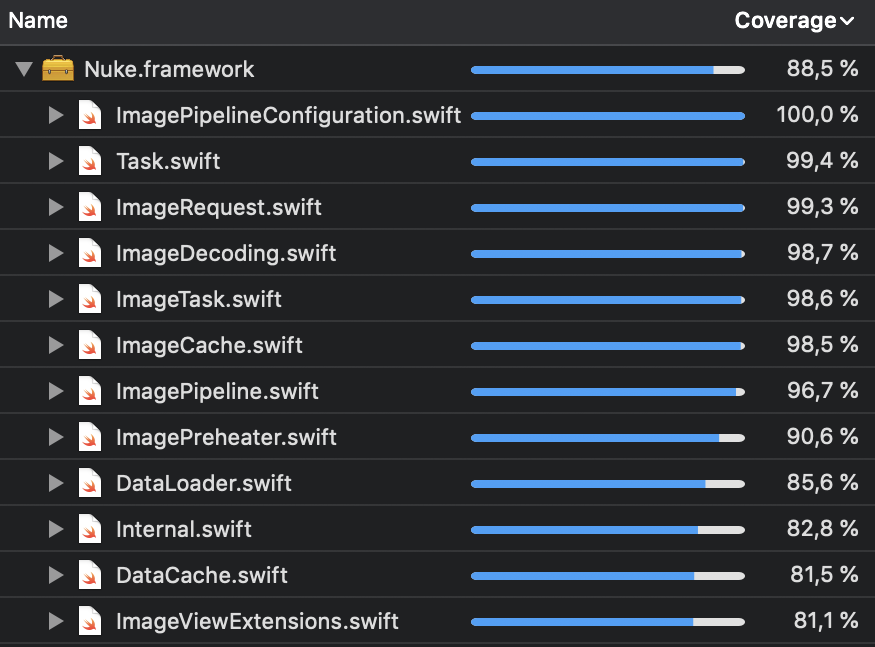 Code coverage also ignores priorities. Not every piece of code is the same. You get the most value by covering the code that is mission-critical, complex and is a common source of regressions. Good testing is based on careful analysis and risk management. You have to have skills in this area, or you are likely to waste a lot of time and effort which could be spend elsewhere.

There are two primary options on iOS: XCTest and Quick. I used both extensively, and my opinion is stick with XCTest. XCTest is easier to learn and use, and it has great Xcode integration.

Quick has some good ideas in it, but I think learning and integrating it is a waste. It also doesn’t play well with Xcode. For example, you can’t jump to a test by clicking on it in Test Navigator. So when a test fails, you can’t open it quickly, which is kind of a terrible experience. There is also no way to run a single test – you have to change it() to fit() in code. There are a lot of issues like that.

Nothing prevents you from writing readable tests which focus on behavior with XCTest. Make sure to extract duplicated code, and keep tests well-structured:

Unlike Quick, you don’t have to spell out everything that you do, avoiding duplication. Quick has a sense of novelty, but chances are, you ain’t going to need it. A valid reason to use Quick2 is if you truly practice Behavior-Driven Development, BDD. I haven’t seen this done anywhere, so I can’t comment on it.

You most likely heard about Testing Pyramid. The idea is that unit tests are cheap and UI and integration tests are not, and that you need to have more of the former. I partially agree with this, but I would like to point a couple of things.

1. UI and integration tests are expensive for a reason. It’s known that the root cause of 99%3 of the defects in iOS apps is UIKit. And you can’t test it with just unit tests. Yes, unit tests are cheap, but they are no substitute for UI tests. Make sure you have both!

2. When added retroactively, unit tests can be more expensive to write than UI tests. And more risky – rewriting systems to make them testable is hard. Before sinking your teeth into refactoring, consider adding UI tests.

3. The reality of many systems and apps is that not all of their components have perfectly designed APIs. Getting back to risk management, I think you are much more likely to introduce a defect by not anticipating how the component you are changing is used somewhere else in the system. This is why I think that for complex systems integration tests are far more important than unit tests.

I think that the testing pyramid is no longer relevant. Hardware is cheap. UI automation tools are better than ever. And, on the other hand, modern programming languages have type-safety features that make a lot of unit testing obsolete. The communities that seem to be the most vocal about TDD and unit testing are Ruby and JavaScript. In these dynamic languages even changing the name of a function can be dangerous. But Swift is very different, it is safe. If you design your components well, they already read like a specification4 and there is very little value to test them in isolation.

What You Should Test #

When should you use unit tests? MVC can help you answer this question. Most people agree that you should cover Model layer5 with unit tests, and you shouldn’t cover View layer. But there is also this grey area, Controller.

MVVM and MVP allow you to test ViewModels or Presenters (Controller layer) in isolation. Some might say that this is the whole point of these architectures, otherwise you are better off sticking with Apple MVC. However, there is a problem with these types of unit tests.

Testing ViewModels or Presenters typically requires a significant amount of effort, primarily because of all the mocks that you need to write or generate. And when you mock, you’re removing all the confidence in the integration between what you’re testing and what’s being mocked. In my experience, these kinds of tests don’t reduce the defects6 and they often end up being more complicated than the actual code.

The more your tests resemble the way your software is used, the more confidence they can give you.

There is also an unintendend consequence of creating too many unit tests for ViewModels with too many mocks – they become a barrier to refactoring7. You make a change in a commonly used service and instead of only updating unit tests for this service, you also have too update all of the ViewModels and all of the mocks that they use. Eventually, these tests erode without significant investment in their maintenance.

I’m not going to focus too much on the nitty gritty details of how to actually write the unit tests. It all comes with the experience. But I would still like to share a couple of tips:

If you want to learn more about unit and UI testing with XCTest, I would recommend going through the WWDC videos, including:

I would also recommend going through Software Testing Guide by Martin Fowler.

Write tests. Reward value, not volume. Optimize for confidence. Don’t create too many tests, there is such thing as too much of a good thing.

Think carefully about where to invest your efforts. Don’t focus on just one kind of testing. Unit tests, integration tests, UI tests, snapshot tests – they all have their cost and they are all useful in unique ways.

Prioritize. Cover the mission-critical scenarios first. And maybe you don’t need to cover this tiny view model which never changes and never breaks.

Experiment. Even if you are doing some of your testing wrong, the risks are low – you are not shipping this code in production.

Take the advice from this article with a grain of salt. The culture of test automation on iOS and some other Apple platforms is relatively young. I can’t wait to see where it goes next.