Before jumping into the Network Extension framework, you need to know a bit of theory about VPN and networking in general. If you are already familiar with networking and VPN, feel free to skip this article. If you are not, this article has a quick overview/refresher on the network protocols, it outlines the problem that VPN is aimed to solve, and then analyzes one of the existing VPN protocols.

There are no prerequisites for going through this article, but the general knowledge of the networking protocols is going to be a plus. This article makes heavy use of Wireshark. If you are not familiar with this tool, I would suggest installing it (it is free), and inspecting one or two sample captures.

What happens when you open your browser and type in a URL? Let’s open Wireshark and find out.

First, the browser needs to send a DNS request to resolve an IP address for the given domain name, for example www.example.com.

The browser sends a DNS query with a domain name www.example.com. 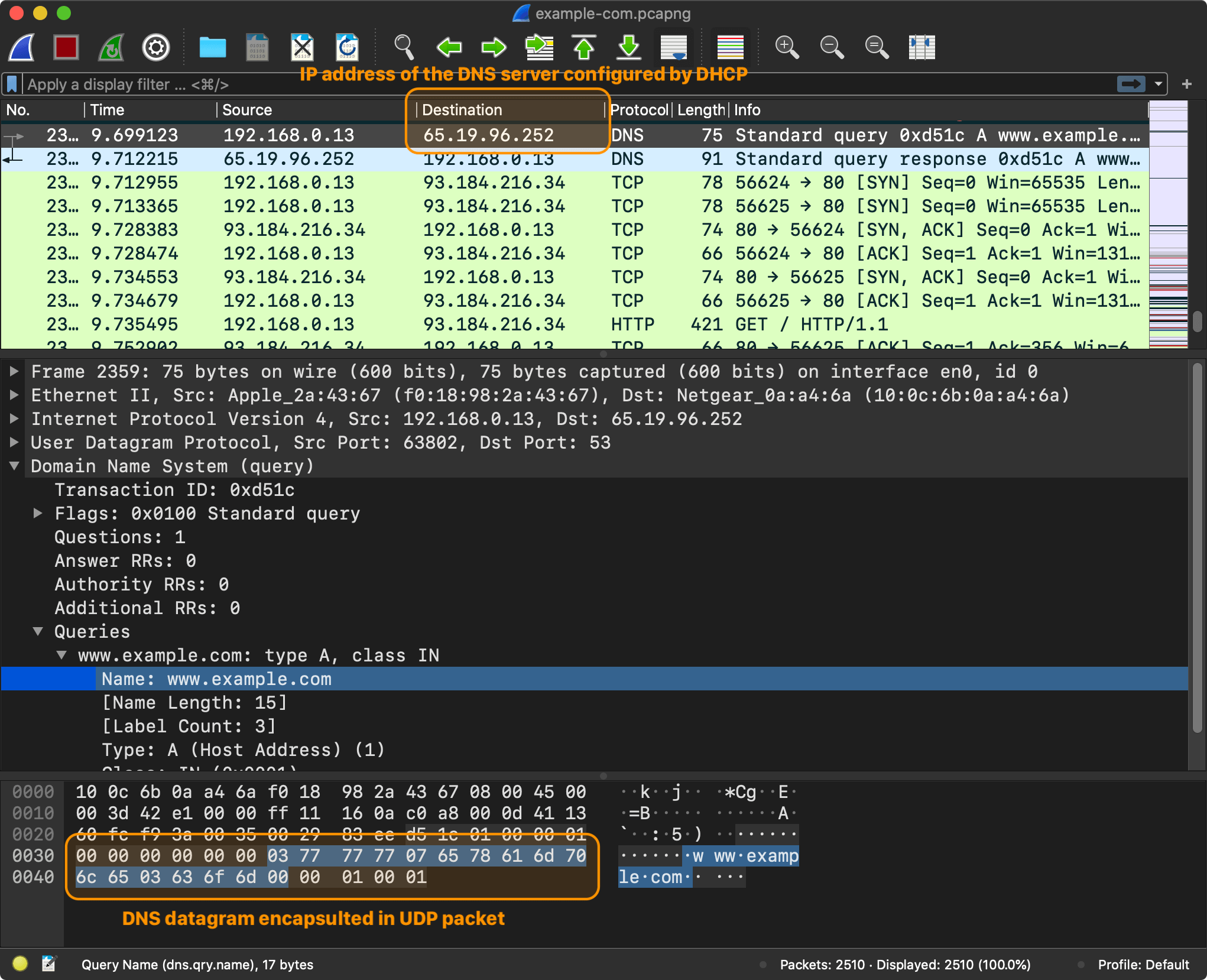 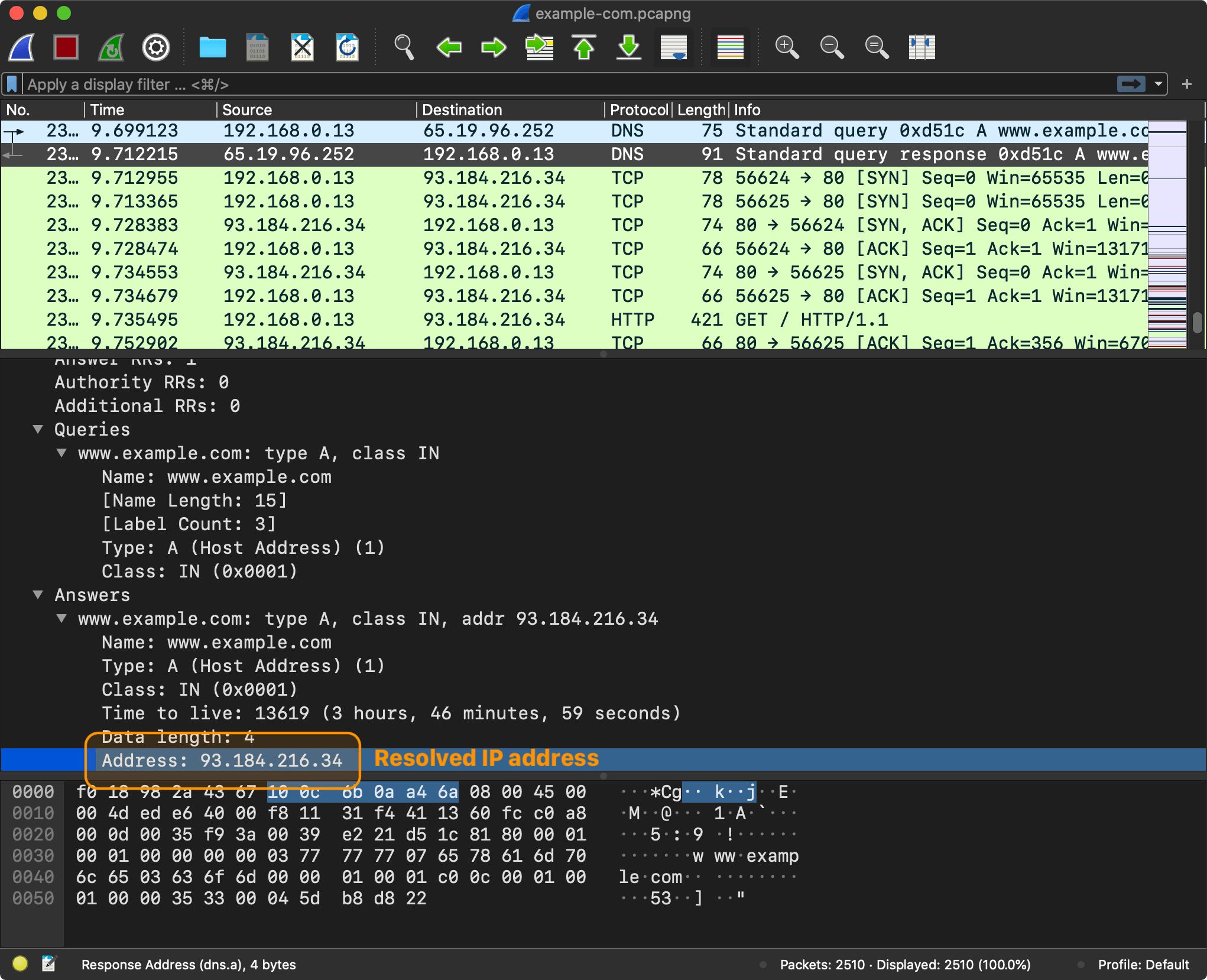 The Domain Name System (DNS) is the phonebook of the Internet. Humans access information through domain names, such as apple.com or nshipster.com. Browsers interact through IP addresses. DNS translates domain names to IP addresses1.

The browser takes the resolved IP address and initiates an HTTP request to fetch the content of the page at the root path (/). 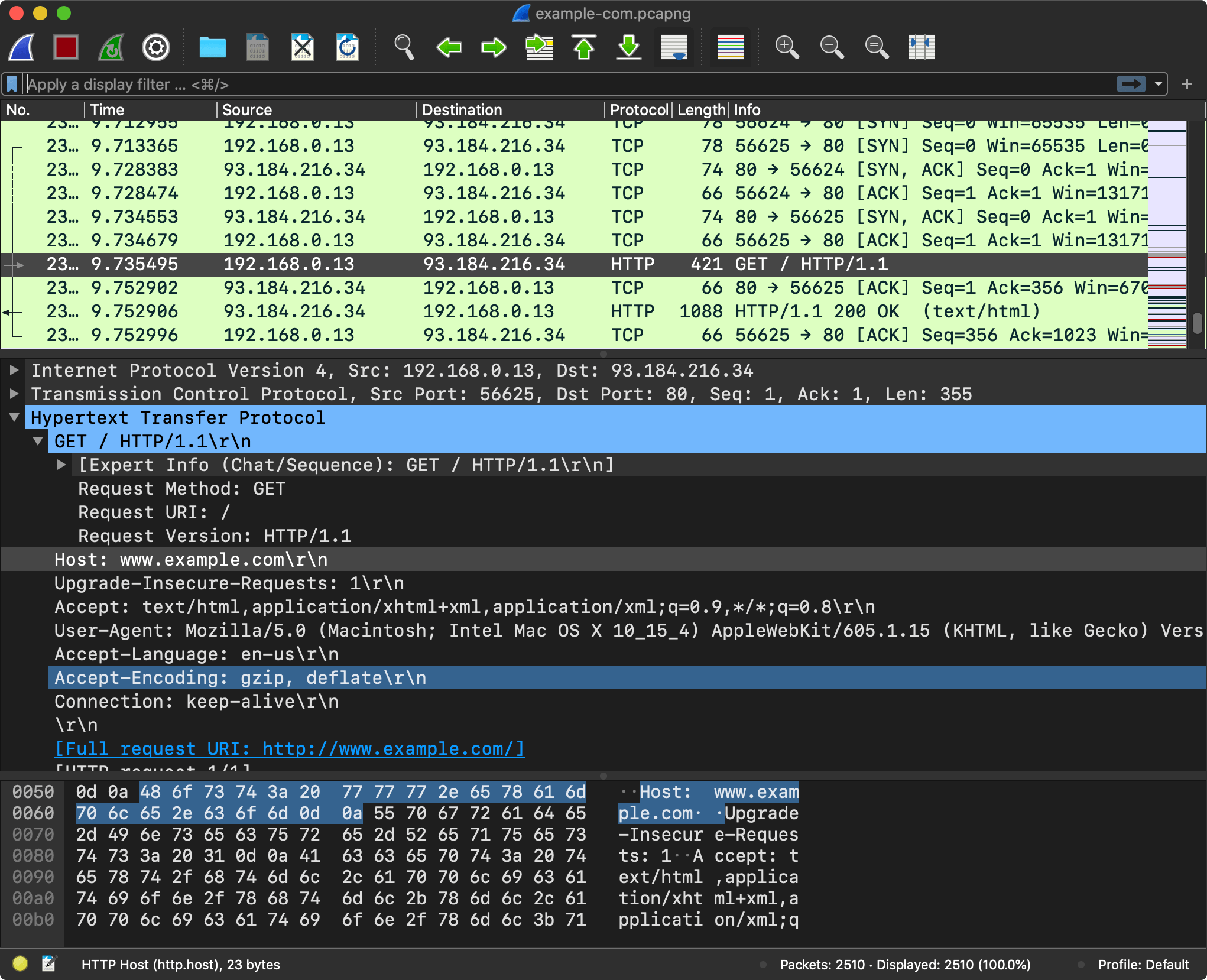 The server returns some HTML content in the HTTP body. 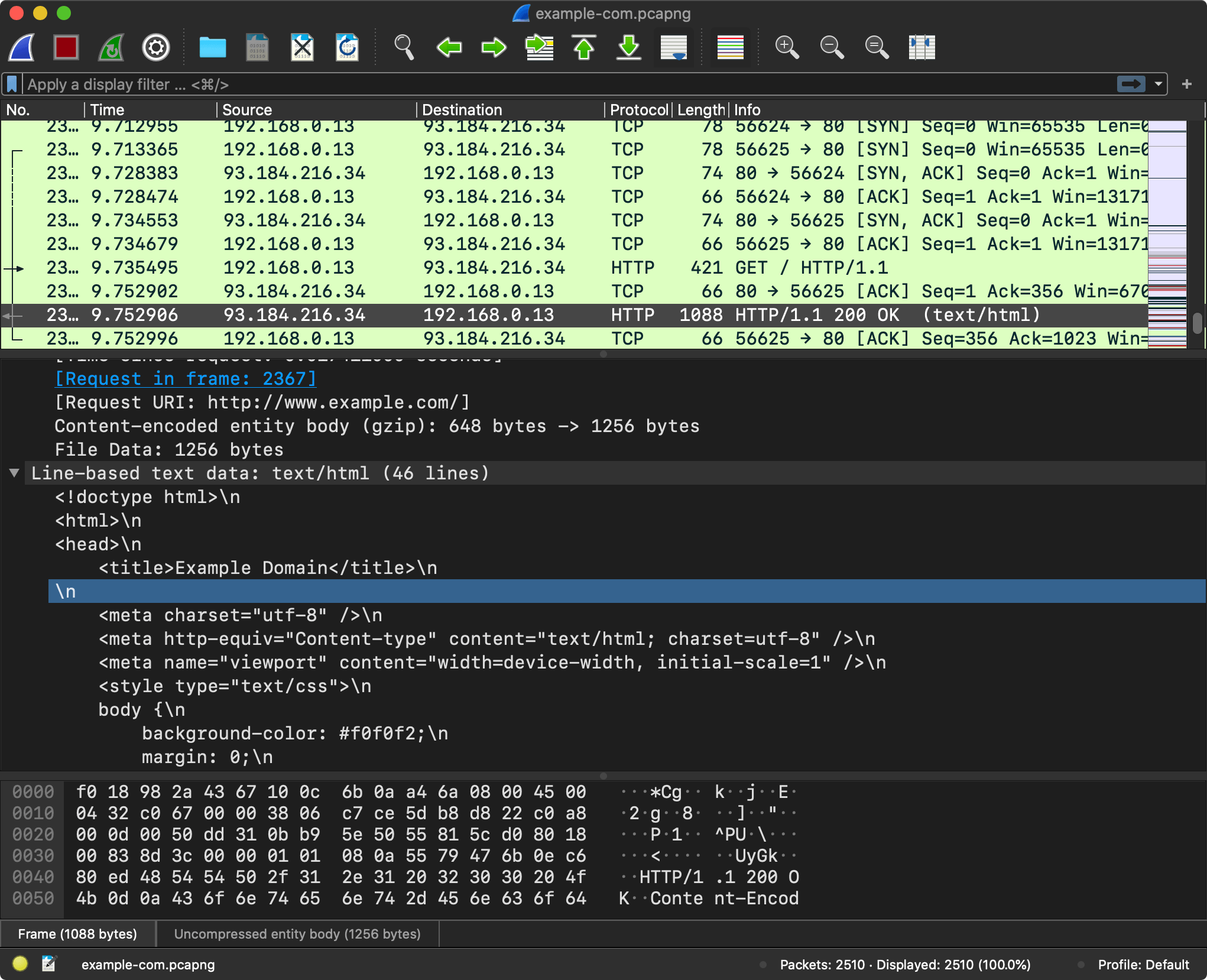 Let’s now spend too much time talking about the application layer protocols. I’m assuming you are already familiar with HTTP and DNS. The reason I used these two examples is that HTTP typically works on top of TCP2, and DNS on top of UDP3.

If you want to learn more, MDN has a great section on HTTP, and Cloudflare – on DNS. If you want to dig a bit deeper, I would recommend reading RFCs. You can find the list of HTTP and DNS RFCs on the respective wiki pages.

HTTP and DNS solve specific application-level problems. But when a computer receives a message, how does it know which application to deliver it to? This is where transport layer protocols, such as User Datagram Protocol (UDP) and Transmission Control Protocol (TCP), come in.

When a server is started, it typically creates a socket, an internal endpoint addressable using a combination of an IP address and a port number (a 16-bit unsigned integer ranging from 0 to 65535), and starts listening for messages arriving on this socket.

When a browser needs to send a message, it also needs a socket and creates one using one of the system APIs.

On Apple platforms, there is a variety of APIs for working with ports/sockets, ranging from the Unix sockets, CFSocket wrapper and to recently introduced Network framework.

Transport layer protocols, such as TCP and UDP, transfer data using protocol data units. For TCP, the PDU is a segment, and a datagram for UDP. Both protocols use a header field for recording the source and destination port number.

The DNS messages are typically sent using UDP (other options exist, even including things like DNS over HTTPS). The UDP datagram header is extremely. simple When a system needs to send a DNS message, it takes the message (the protocol of the message is irrelevant, for DNS it’s just raw bytes), and prepends 4 bytes of the UDP datagram header. If we go back to our browser example, here is what the UDP header looks like: 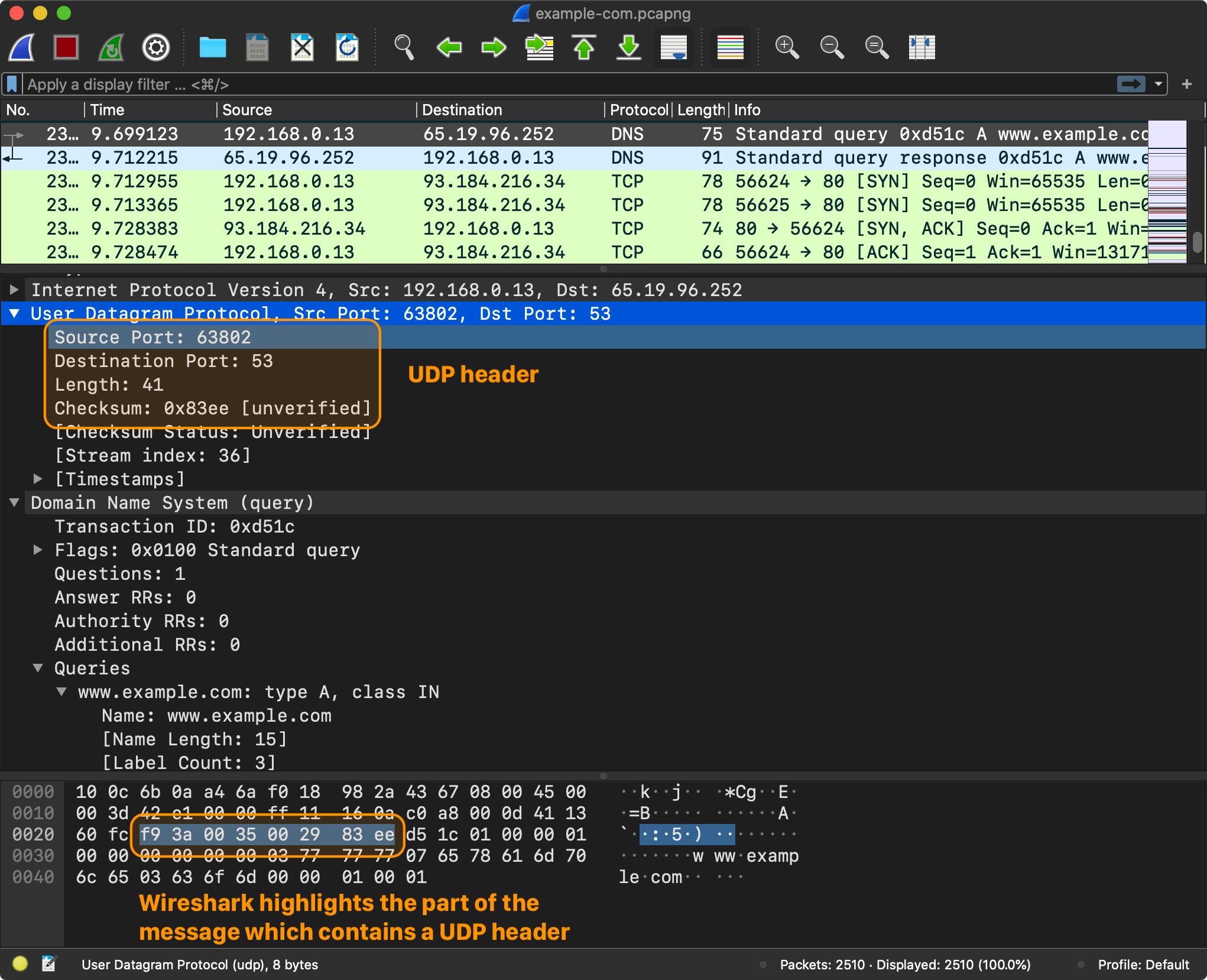 The source port is 63802, which is the port that the browser reserved for itself, and the destination port is 53, which is one of the well-known ports.

Obviously, UDP and TCP are completely different. TCP protocol has its own segment structure. TCP is connection-oriented, it provides reliable, ordered, and error-checked delivery of a stream of octets. UDP, on the other hand, uses a simple connectionless communication model, it’s very minimalistic.

In the previous section, we established that a socket is addressable using a combination of an IP address and a port number. We know what the port is for. But there are no IP addresses to be found in UDP/TCP headers. To know which computer to send the messages to, you need an IP address and IP protocol. Let’s get back to our Wireshark capture to see what information an IP header contains. 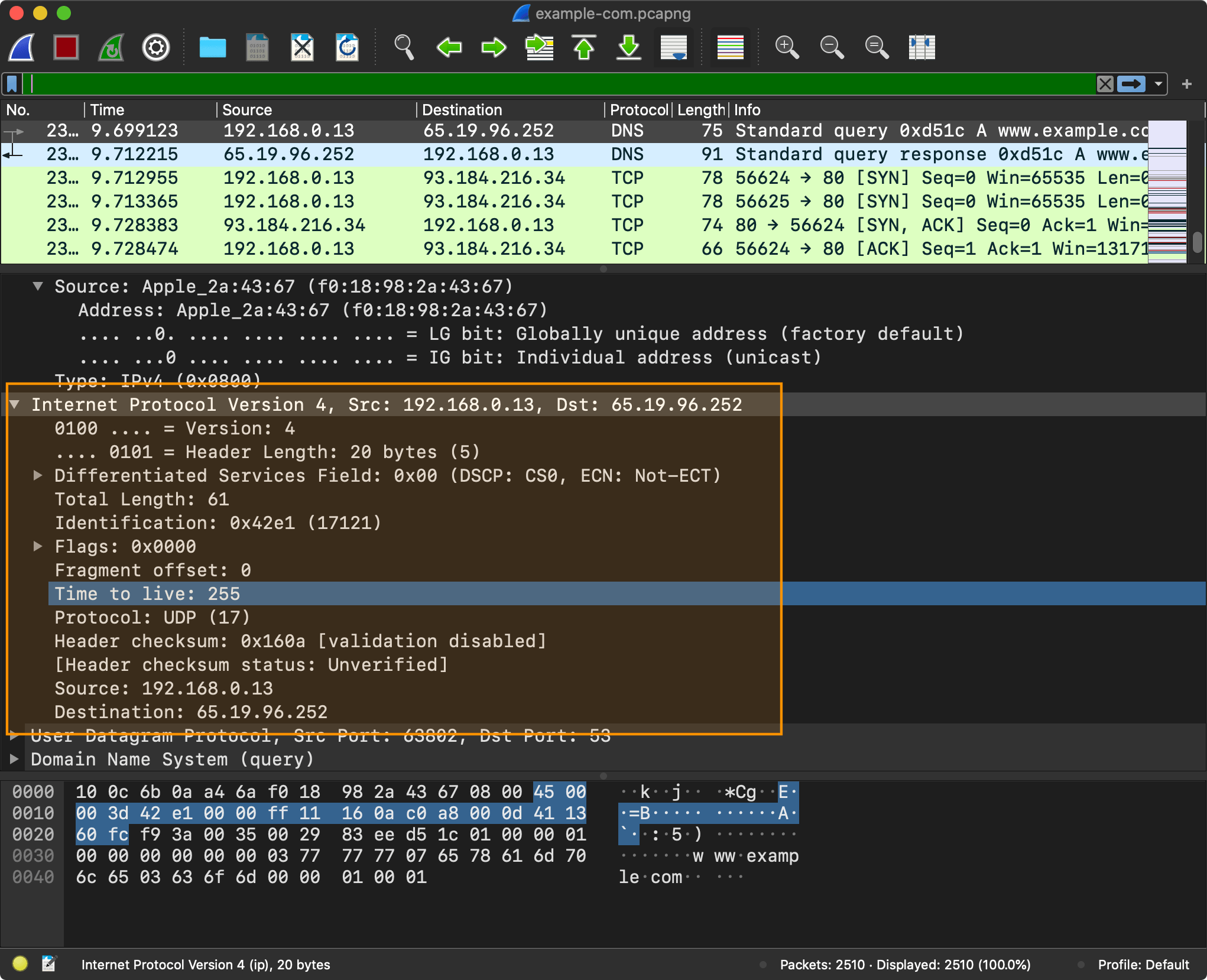 All of the information that you saw captured using Wireshark was recorded from my en0 network interface (WiFi).

There are physical network interfaces, such as en0 (which is your WiFi module on macOS). You can list all of those using networksetup -listallhardwareports command. Each physical interface has an associated Ethernet Address and a hardware device, for example:

And then there are virtual network interfaces, such as lo0 (a loopback interface which computer uses to communicate with itself) and utun (which are typically used by VPN, more on this later). You can use ifconfig to see all of the network interfaces, including both physical and virtual.

All of the information that you saw from the captures in this section is also visible to my ISP and to any servers between me and the destination. They saw all my DNS queries, they saw my IP address, and in case of HTTP (unencrypted), they saw all my HTTP communications too4. Using this information anyone can identify and track me. And these are the kinds of problems that VPN is designed to solve.

What is VPN (Virtual Private Network)? Originally, VPN was designed to establish secure connections between a computer and a protected or private corporate network, using an otherwise insecure public network. This typically involved “making” a computer part of the private network so that the computers within the network could address it.

In recent years, VPNs also blown up in popularity in the consumer market as a way to stay secure and anonymous when going online, and also enjoying unrestricted network access by hiding the source of the traffic. Business and personal VPN are typically very different products. I’m going to focus primarily on personal VPN in this series, as it involves slightly less complexity to deal with.

How Does It Works? #

The key idea behind VPN is surprisingly simple:

The IP packets end up being wrapped in another IP packets, a networking version of a Russian nesting doll. 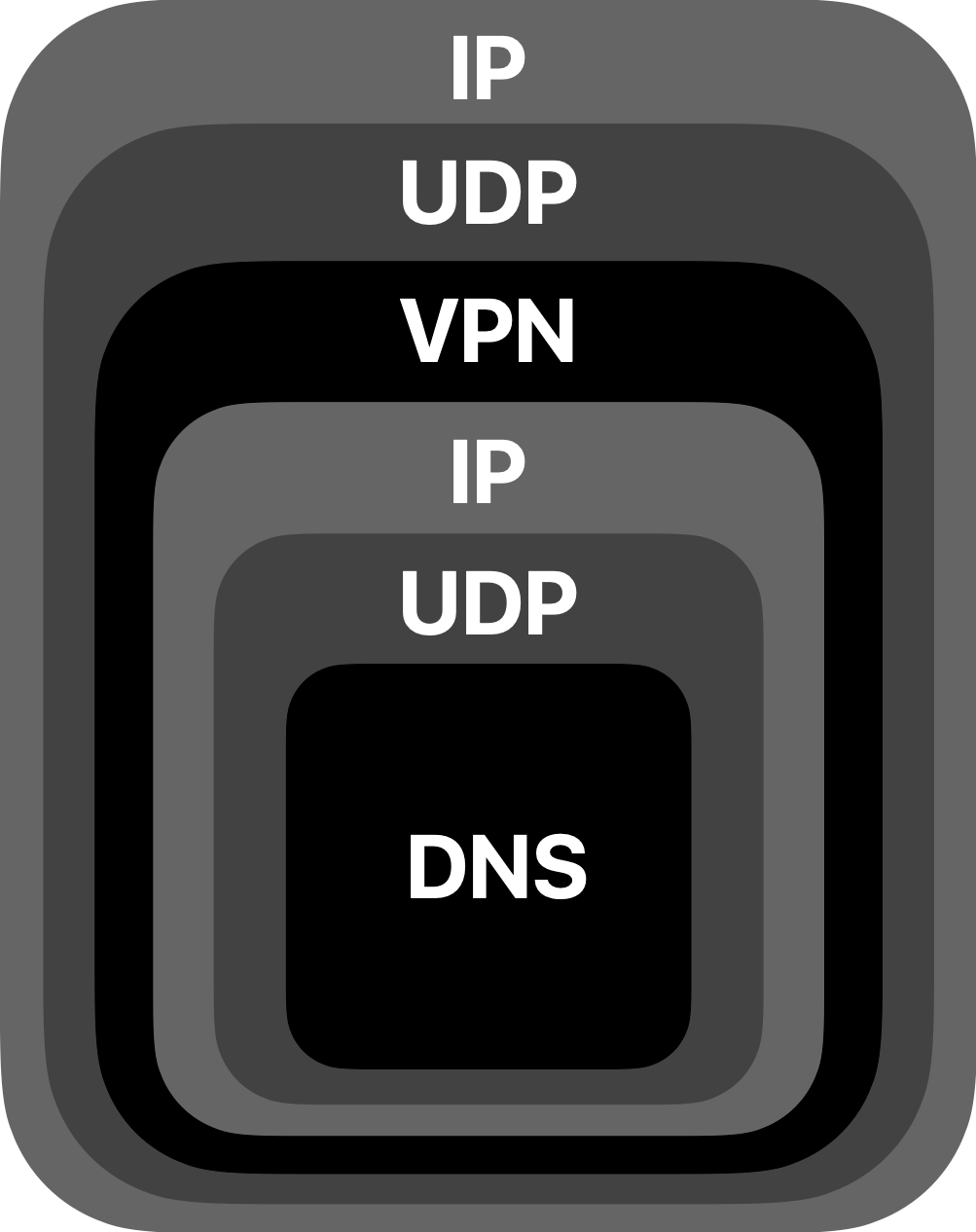 This is a simple idea, yet it achieves all of our goals. The original IP packets are fully encrypted. You can see neither the application, nor even the internet layer contents (IP addresses). The only thing ISP or other observers are going to see is some blob of encrypted data going between a VPN client and a VPN server.

Now, how do you implement something like this? This is what I’m going to cover in the upcoming articles. It is going to involve direct IP packets manipulations, encryption, virtual network interfaces, and more. Exciting stuff!

The idea behind VPN is simple, yet designing and implementing a protocol is far from easy. Before designing a VPN protocol of our own, it is worth exploring an existing VPN protocol, such as OpenVPN.

The description of the protocol is surprisingly short and simple. As a first step, the client establishes the session with the server and exchanges cryptographic information.

The client sends a control (P_CONTROL) packet with P_CONTROL_HARD_RESET_CLIENT_V2 type which prepares a new session. 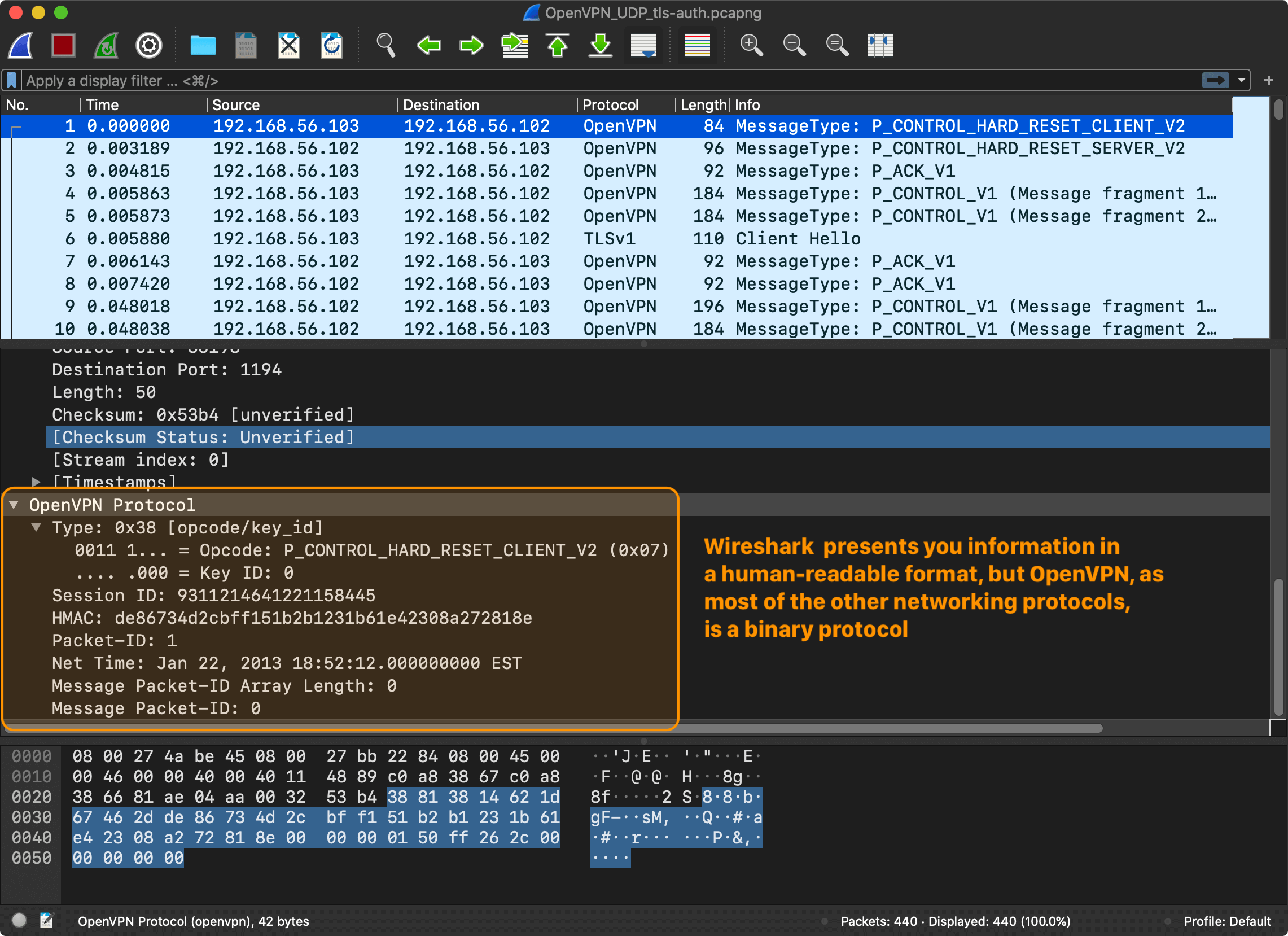 The server responds with a control packet of its own – P_CONTROL_HARD_RESET_SERVER_V2 type. 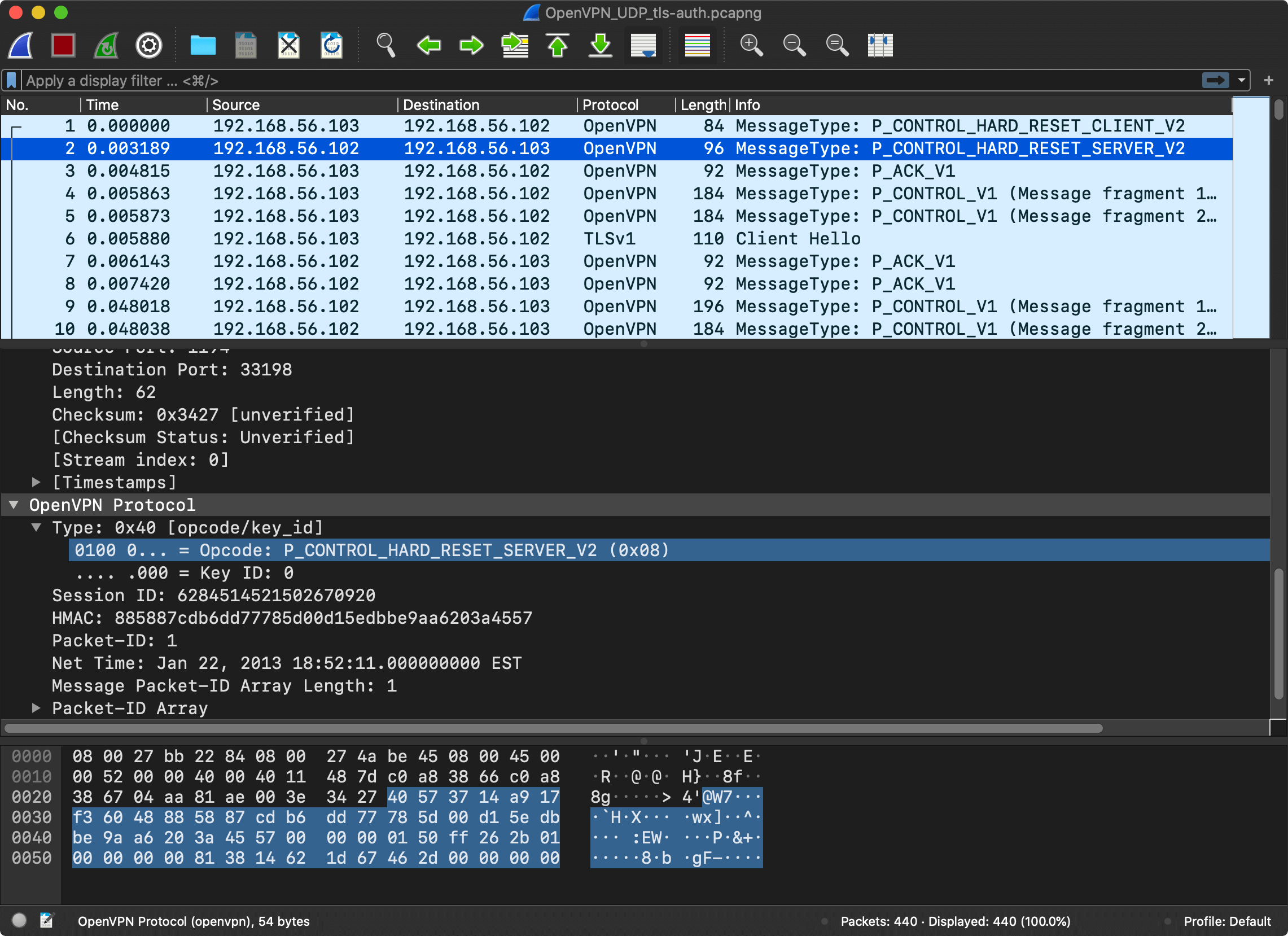 The client acknowledges that it received the “reset” from the server. 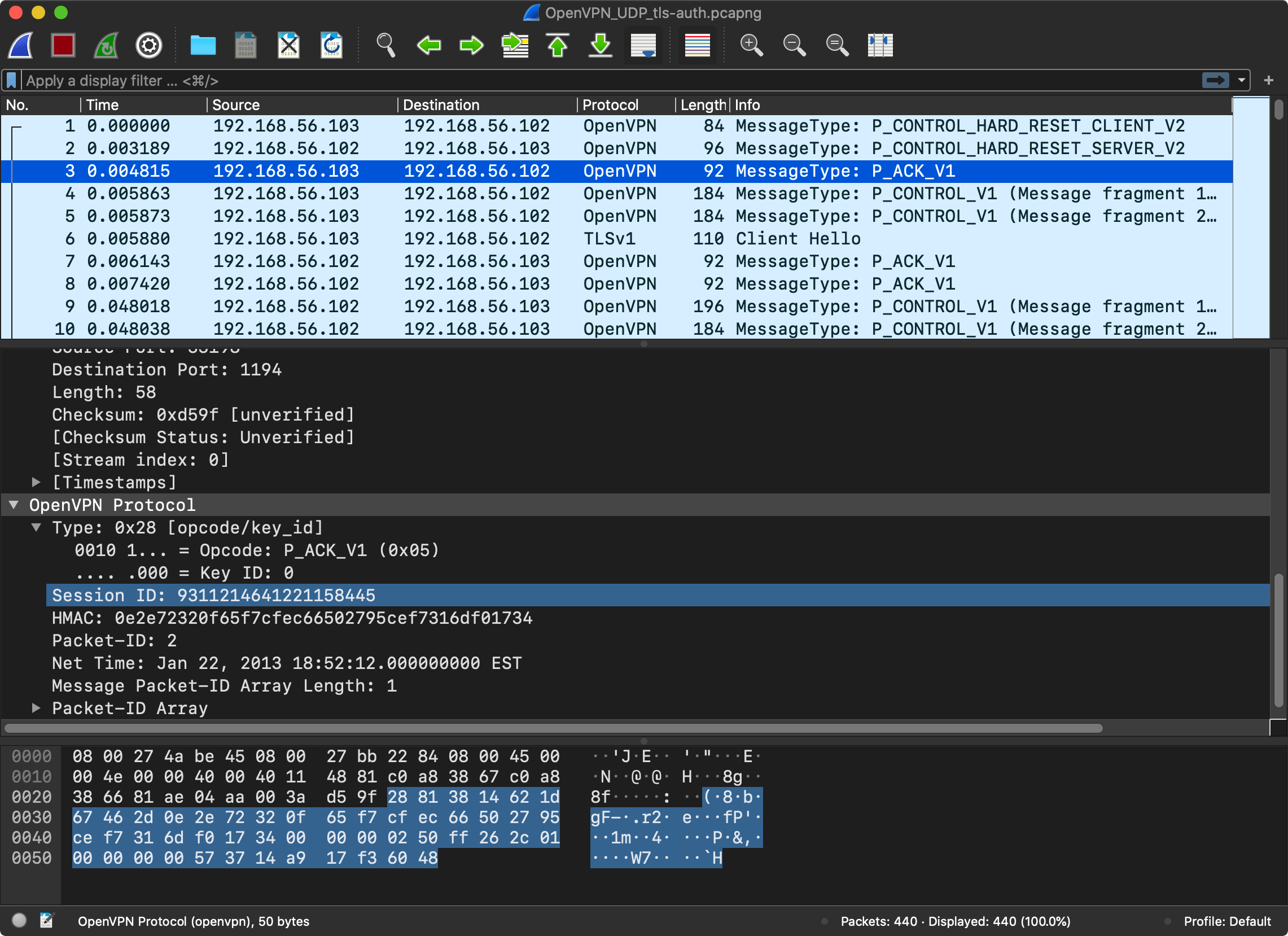 When the session is ready, the client and the server need to exchange cryptographic data to agree on a key. The exchange, called the “handshake” in TLS6.

The client sends another control (P_CONTROL) packet, this time with a payload. 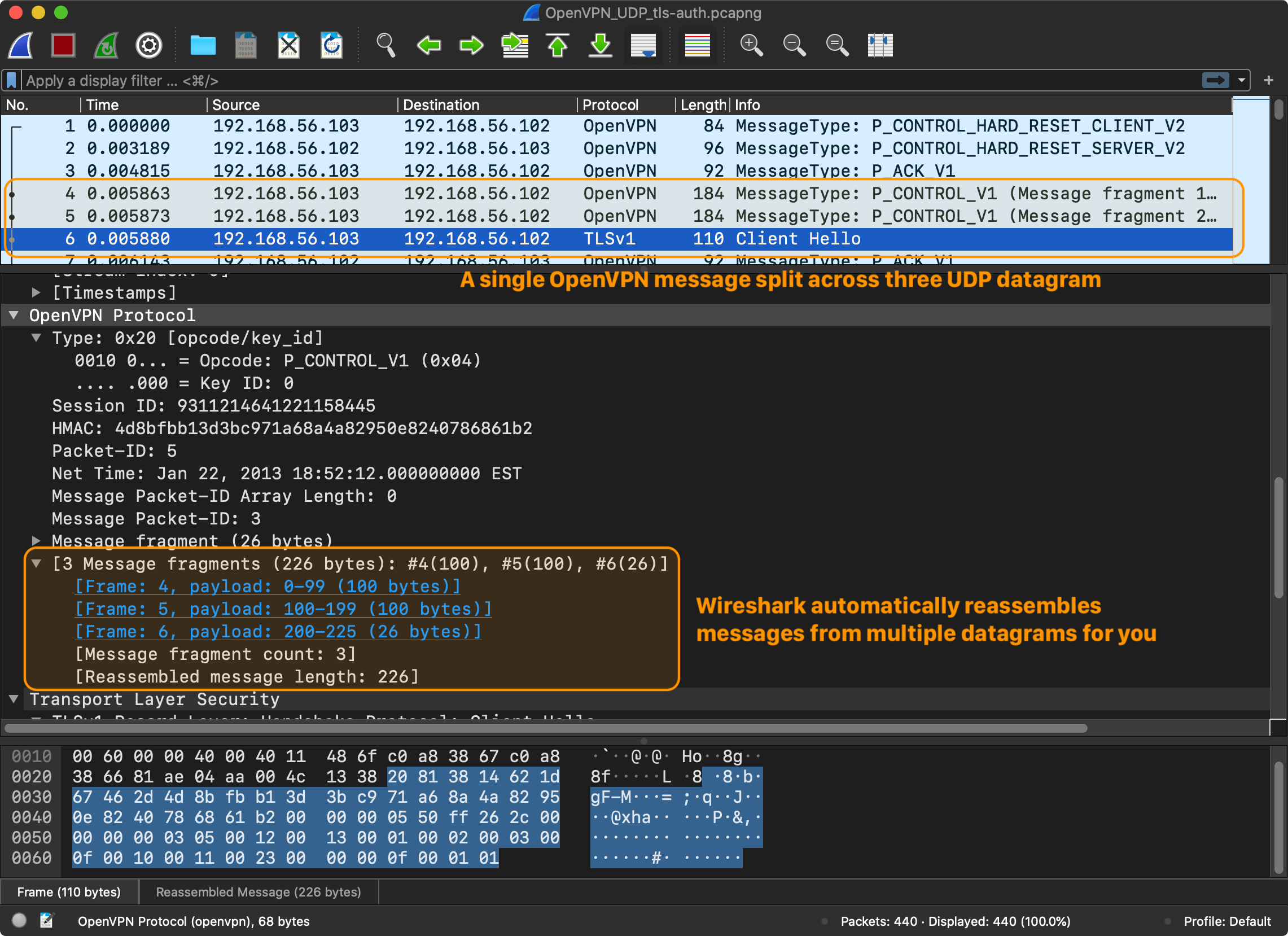 This packet has TLS payload. 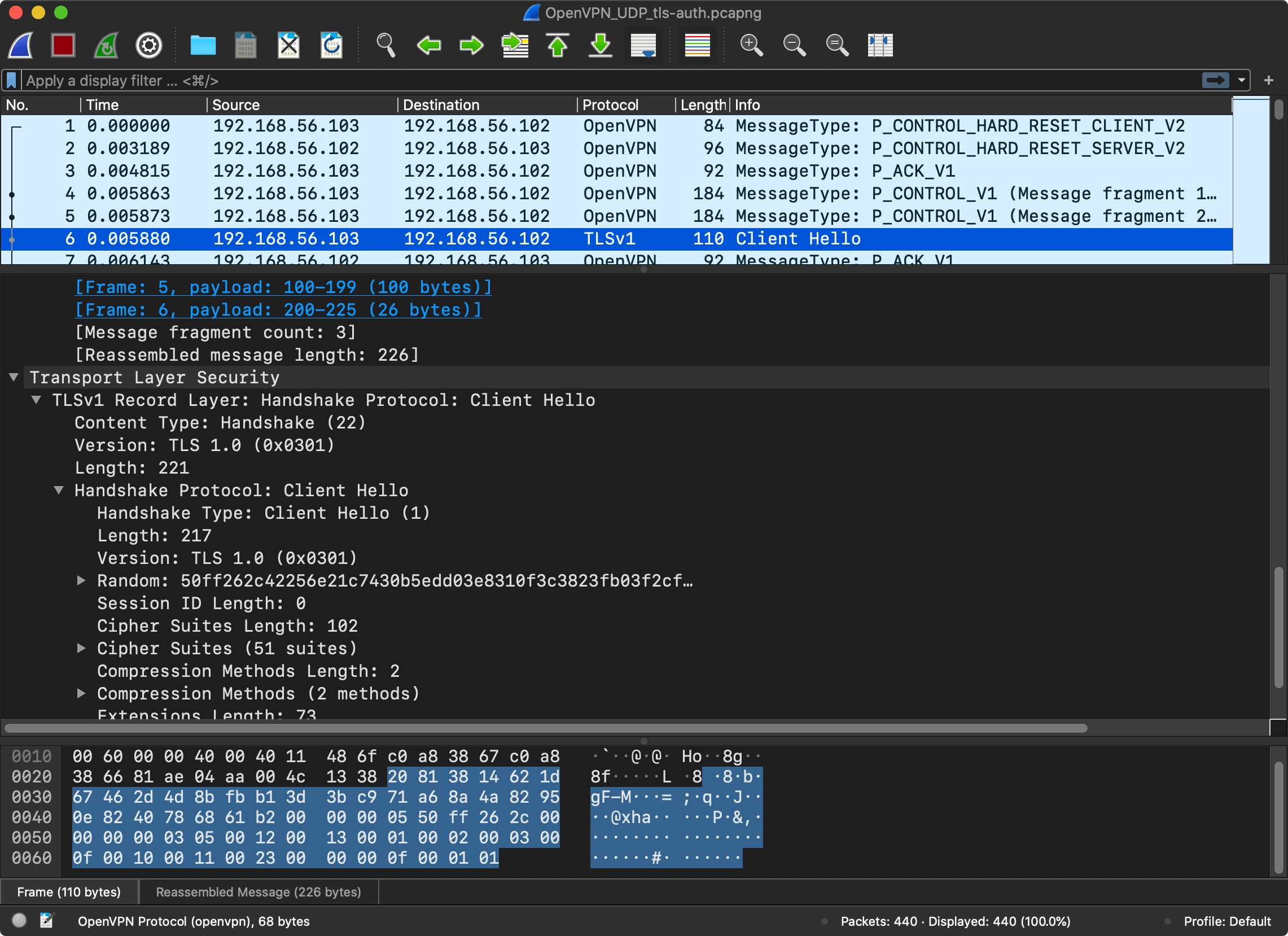 I’m not going to go into detail regarding the TLS exchange. The Wireshark session only shows the first messages of the TLS “handshake”. The entire handshake requires a few round-trips. The point is that after a few control messages, the client and the server are ready to encrypt and send messages to the server, regardless of which version of TLS and which encryption model was used. And this is what P_DATA_V1 message type is for – data channel packet containing actual tunnel data ciphertext. 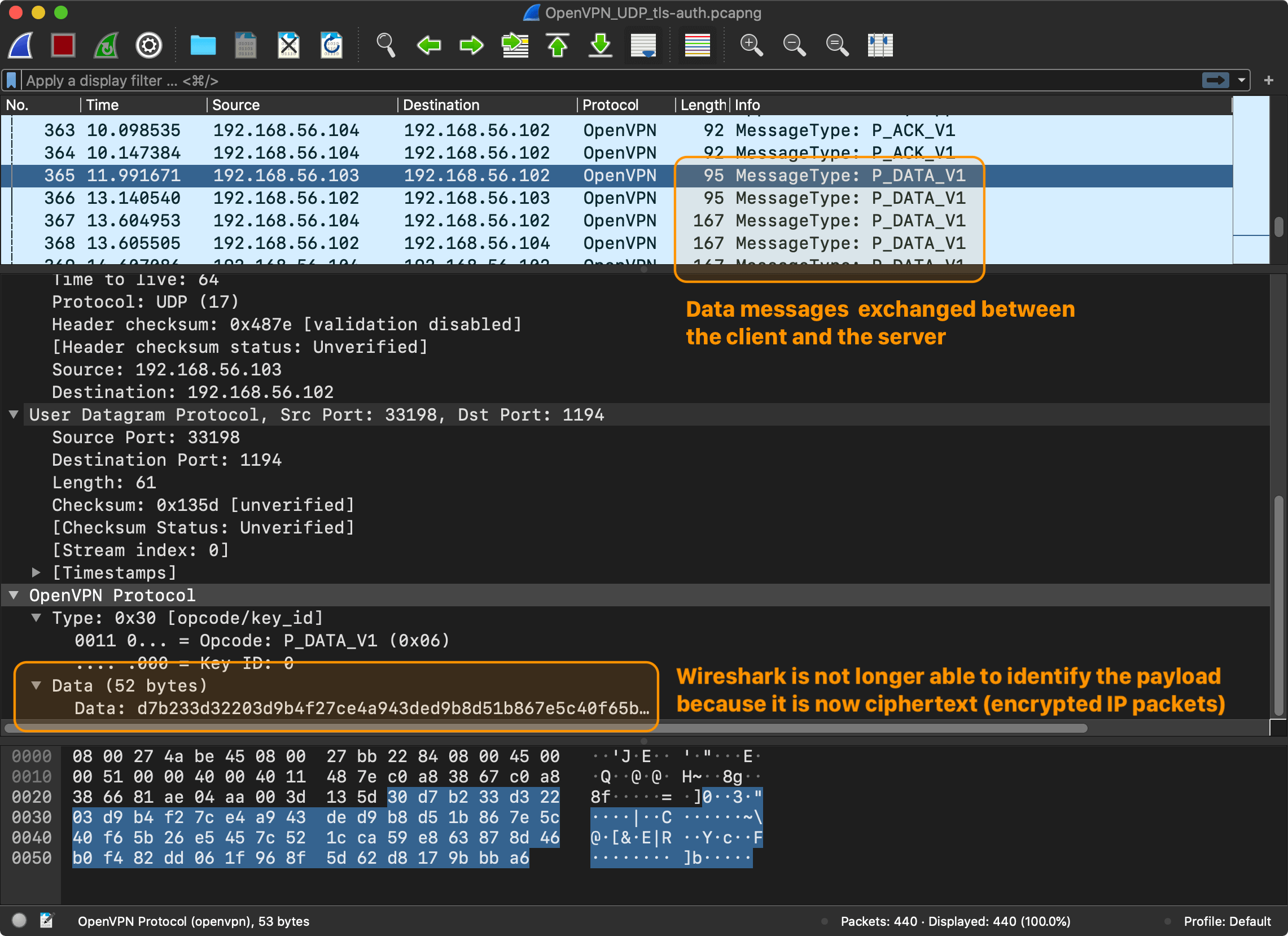 And this wraps up an overview of OpenVPN. There is no need to fully understand it, but the big picture is clear. The main takeaways are:

This is enough information to start working on our toy VPN protocol.

I am a passionate software engineer with several years of the experience in the industry. I write at kean.blog. I authored multiple open-source frameworks, including Nuke, Future, Align, Pulse, Regex, and many more.

Introduction to a series of posts about the Network Extension framework

I'm a software engineer with several years of experience in the industry, creating articles and frameworks for the Apple developer community. To support my work, please sponsor me on GitHub.

Spotted an issue? Edit on GitHub.